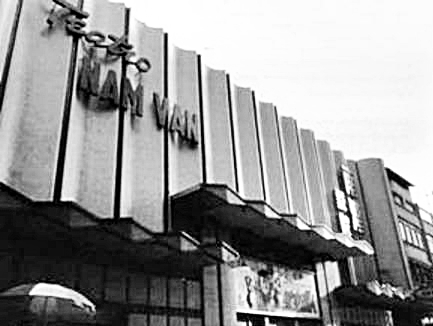 The Teatro Nam Van, situated in the historic central district near the picturesque Praia Grande, was the largest cinema in Macau. It stood on the corner of Avenida de Almeda Ribeiro and Rua do Dr. Pedro Jose Lobo.

It opened to business on 20th November 1964, with Rodolfo Abate in “The Big Business” and Sylva Koscina in “Copacabana Palace”. With a 60-foot wide screen, it boasted having the widest screen in Macau. The 1,600-seat auditorium with stadium seating in the rear part was on the ground floor of the theatre building.

On 15th March, 1975, a home-made bomb exploded in the men’s toilets on the right hand side of the screen after the management of the theatre was blackmailed by gangsters a week prior.

It showed first-run Chinese dialect and English films until its closure on 1st January, 1995.

It was demolished and a commercial building, the Macau Square Shopping Centre, was built on the site of the theatre.

They must speak Portuguese in Macau-the street address is in that language.

Macau was once a Portuguese colony, just as nearby Hong Kong was a British colony. Now both have been handed back to China.

Does anybody have a link to a news story or more information about the fire bombing?