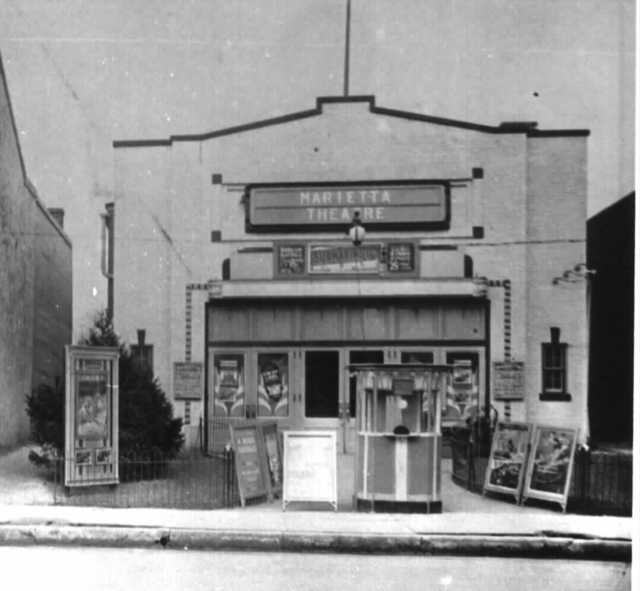 The Marietta Theater was built in 1914. Besides a conversion to sound in 1929, the Marietta Theatre has not undergone any drastic remodelling in the past 70 years. The theater has been closed for several years.

In January 2018 it was purchased by the Susquehanna Stage Company of Marietta with plans to refurbish and reopen as a live theatre, with some film use.

…Or the Colonial Theater in Phoenixville, PA. It opened in 1903 and I believe has been running in some form or another since then.

The Marieta Theatre has been closed for many years now. It is still standing and from the outside looks like it could reopen. A few years ago someone was interested in reopening the theatre. There was supposedly a survey done to see what the interest would be in patronizing the reopened location. However, nothing ever came of it. Consequently this small town in Lancaster County along the Susquehanna River has no local theatre. For it’s last few years of operation it was playing subruns with an occasional special night of silent films complete with live organ music. However, if the theatre would ever reopen, the seats should be replaced. From our last few visits I do not think there was one seat left with any springs in it. I would bet they are the original seats!

Just submitted a news item about this theatre. According to the Lancaster, PA New Era newspaper, the Marietta Restoration Associates have purchased this theatre recently for $40,000.00. This nonprofit organization helps to restore old buildings in this community. They are planning public meetings to determine what the residents want to use this theatre for. Currently, they are spending $20,000.00 on roof repairs. Unfortunately, the seats, organ, and other furnishings have been removed. The theatre operated from 1914 until 1997. It had 300 seats. It was the oldest operating motion picture theatre in Penna. and was one of the oldest in the U.S. SamuelAcri, an Italian immigrant came to Marietta in 1910. He started showing movies in a rented room in Central Hall, which is now the borough hall. The theatre was built in 1913 and opened in 1914. It was called the Acri theatre until sometime in the 1930’s when the name was changed to the Marietta Theatre. Both his wife and daughter played the organ during the silent movie era. Let’s hope that this association continues its attention to detail and the Marietta Theatre will again become an active part of this small river town community.

There is hope for the Marietta Theatre. The Marietta Restoration Associates, Inc. are busy restoring this 1914 theatre. The seats – which I swear were the original – have been removed. The roof has been replaced. They are trying to raise $133,000.00 to fund planning, permitting, and architectural work which the organization hopes to complete by the Spring of 2008. The structure was in disrepair as it has been sitting there unused since 1997. They are counting on the restored reopened Marietta Theatre as the start of a stimulation for the community. Although there is not a parking lot for the theatre, the number of times that my wife and I have gone there to the movies, we never had a problem finding on street parking. I have every hope that they can succeed in their mission.

The guys who ran the Marietta Theatre some years ago also ran a recording studio. I recorded a score for a short film by New York animator Michael Sporn in the Marietta. My original music won an award for “Best Animated Score” in the ASIFA-East FIlm Festival in New York that year. (I’ll have to check on the date, circa 1965-70).
Does anyone know the current status of this theater?

Penway 14 – It is still being restored by the Marietta Historic Preservation Association. I know they had removed all the seats and were doing some upgrading of the building – including a new roof. I know the last time my wife and I saw a movie there – many many years ago I swear they were the original seats!!!! I do not think they exactly know what they are going to do with the theatre when the work is done. Perhaps you can contact them??

I worked as a projectionist at the theater in the late 80’s and early 90’s. I loved working with the vintage carbonarc projectors.
It was a great part of my younger days. Are they for sale?

In 1979 the place was a recording studio, called Atlantic Sound Productions. The owner had what he claimed was the only Harrison mixing board east of the Mississippi. The control room was in the former projection booth, so by that time the projection equipment had been removed. I believe there were still some seats in place near the rear, but down front they had been removed to make room for bands to set up. There was a drum isolation booth constructed on stage right, but it wasn’t possible to see the drummer from the floor where the rest of the band played. ASP offered a deal- 8 hours recording/mixing, 500 45 singles for $500. My band, The Blame, recorded “Elevator Shoes” b/w “Little Girls in Hollywood” there one cold day…

I have wonderful NEWS for this group! The Marietta Theatre has been purchased by the Susquehanna Stage Company of Marietta. We are in the process of raising funds for the Remodeling of the theater as the new home of the Susquehanna Stage Company. As well as LIVE theater performances there are plans for showing films, possible mainstream, or classic films. Please visit us for more information and to donate to this amazing Theatre! www.susquehannastageco.com