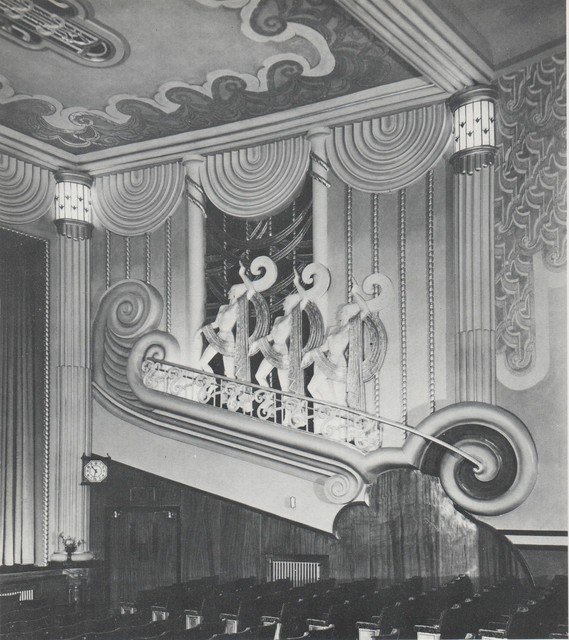 The Northwick Cinema is located two miles out of Worcester town centre. It opened on 28th November 1938 and was built and operated by an independent operator, who also operated the Scala Cinema in the town centre.

The exterior of the building is in brick and has two flanking bays, with recesses containing windows and a central feature which hold the stylish vertical name sign.

Inside the auditorium, seating was provided for 800 in the stalls and 309 in the circle. The side splay walls close to the proscenium opening are a wonderful example of Art Deco plasterwork. They are the work of interior designer John Alexander (his only surviving work in a complete and unaltered form). The designs are of over-life-size mythical figures, three on each side, who are accending a marvelous example of an Art Deco style staircase, with many swirls, scrolls and curves, all done in fibrous plaster. There are also many other decorative features around the interior of the building, as well as numerous original 1930’s light fittings.

The Northwick Cinema closed as a full-time cinema on 10th September 1966 with Dean Martin in "The Silencers" and Audie Murphy in "Arizona Raiders".

It re-opened on 30th September 1966 as a bingo club, and ran as this under several owners, the last being Mecca who closed it in 1982. The building stood empty and unused until it re-opened on 6th June 1991 as an entertainment centre, with John Alexander’s beautiful interior fully restored. It was used for live shows and also some film use, projected onto a pull-down screen. This venture lasted until 1996 when it closed and the building was boarded-up awating its next use.

In August 2003 plans were put forward to demolish the cinema and build flats on the site, but these were objected to by the Cinema Theatre Association and were turned down by the local council. In October 2006 work began to convert the building into an antiques centre and to build 16 flats on the car park at the rear. One year later in October 2006, the antique centre opened. The interior plasterwork and many details were restored and retained, as were the cinema seats in the circle.

The Northwick Cinema is a Grade II Listed building.