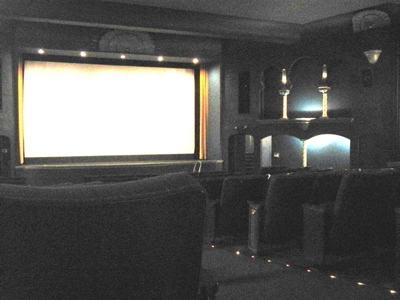 The Granada Theatre was opened June 14, 1927 with Charlie Murray in “Lost at the Front”. It was designed in a Spanish/Moorish style by Portland OR based architect P.M. Hall Lewis and seating was provided for 800. Interior decorations were by Charles Anman of Portland OR. The theatre suffered damage from a fire in 1994. Now renamed Liberty Theatre it is still a first-run movie house and has been beautifully restored in recent years.

In 1999, a 33-seat auditorium was added in a space adjacent to the original building.

Is there any information on when the Spanish styled iron work above the marquee was removed? Neither website list the year of the much older renovations.
Oddly the Liberty’s own website opens with an animated version/shape similar to what was above the maruee originally.

Also does anyone know what year the street out front was converted into a more mall looking configuration?

Here is an item in Boxoffice magazine, April 1950:

CAMAS-New carpeting in the lobby and aisles of the Liberty Theater is the first step in a modernization program inaugurated by manager George Hubbard.

The Rootstock Capital Management LLC has just acquired the Historic Liberty Theatre in Camas and is in the process of giving this classic small town cinema some TLC in preparation for a grand opening in mid-March. The plan is to reopen as a traditional movie theatre and transition into food and “adult beverage” service during the first year. The theatre currently seats 342 in the main auditorium of which 80 seats are in the balcony. During the transition, the balcony will be turned into a 21+ are so that beer and wine can be served. A small second screen on the premises will be renovated with new seats and digital projection for showing specialty films and hosting private parties. When it reopens later this year it will be called “The Granada” the original name of the Liberty when opened in 1927. New phone number 360-859-9555, on the web at camasliberty.com and check us out on Facebook, Liberty Theatre of Camas and Washougal.

This article includes the March, 2011 reopening of the Liberty/Granada as one of three new theater options that shall be available to the residents of Washington’s Clark County by the end of 2011: View link.

…Here and here, too.

What a beautiful theatre. As an old showman I’d love to be a part of such an operation.

This November 29, 2015 article from the Columbian (Vancouver, WA) by Robert Burdick tells how the Liberty Theatre is making improvements and features several new photographs of the theatre. http://www.columbian.com/news/2015/nov/29/liberty-theatre-invests-in-improvements-to-broaden-its-appeal/