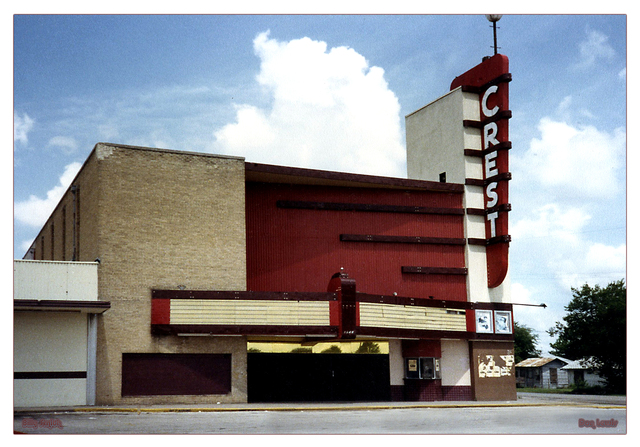 The Crest Theater was opened on March 30, 1948. It had a huge vertical sign on its right front corner which was probably a little over three stories high.
“Crest” was spelled out in white block letters with the “C” being the largest letter and each letter after becoming smaller.

A marquee reached accross the building and and sheltered the entrance and outside ticket booth.

Closed and laying empty for several years, the Crest Theater was demolished in 2008.

I wanna buy this theater! It looks very well-maintained…

well im sure you can get it cheap,theres not much going on in the area,there trying to bring it back up,and on the good side,its near the golf course and the DART so i think it would be a good buy.

looks like it was demolished very recently. A Grocery store nearby seems to be taking over the lot.

wow i didnt know it was gone.but really i couldnt see anyone going there if it were to reopen.

My Dad & I went by last night (Jan. 7 2009) to take a look at the Crest only to find that it has been demolished!!! Sad!! I have two photos of the Crest on Flickr. Seen here:.. http://tinyurl.com/8mjxzd
…
Randy A. Carlisle
Historical Photographer

a june 1987 picture of the old crest theatre. can be seen here.
View link

The December 27, 1947, issue of Boxoffice Magazine said that the new Crest Theatre would open in 60 days. It was being built for Phil Isley Theatres.

A few photos of The Crest Theatre I took back in September of 2007.. Sadly, it was demolished & a Grocery store now occupies the lot.. Enjoy.. Randy A Carlisle – Historical Photographer

Phil Isley Enterprises theater circuit opened the Crest at 2603 Lancaster Road in the Cedar Crest Shopping Center on March 30, 1948 with the film, “Cass Timberlane.” T.N. Childress was the manager of the 1,200-seat suburban in Oak Cliff. Two nights later, the Isley Circuit launched its new Avenue Theater at 4923 Columbia Avenue. Youth stage and talent shows along with matinees connected with the audiences. The Crest showed mostly second-run films, horror films, and westerns. Art Dorner brought his traveling Frankenstein stage show to the Crest on October 22, 1948. Dorner was the stand in for Boris Karloff in “Frankenstein” and “Bride of Frankenstein.”

In 1965, Rowley United acquired the Isley Circuit but would eventually divest itself of Isley’s Avenue, Kiest Drive-In, Big D Drive-In, subleased the Heights Theater, and would sublease The Crest. Big Tex Theatres, Inc. took on the Crest which operated the it through 1971. Rowley United stepped back in and appears to have completed the Crest’s run on June 8, 1973 with a double-feature of horror films. The Crest appears to have ended as a film theater in 1978 operating as an independent and showing chopsocky and Blaxploitation double features as a grindhouse. Because that works out almost exactly to 30 years, it could have been an end-of-lease closure and the double bill of “Dragon Squad” and “Super Weapon” could be the final films. From that point forward, The Crest was used as a nightclub and special event house sporadically and was vacant for many years prior to its demolition in 2008.