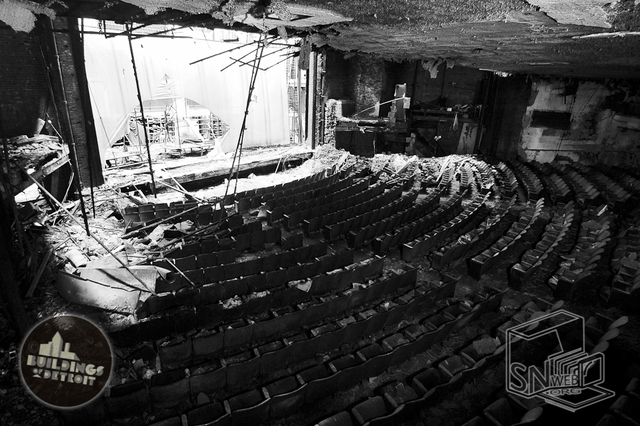 Opened on September 1, 1917 inside the Fine Arts Building, the Adams Theater was designed, like so many other Detroit theaters, by C. Howard Crane for the Kunsky circuit. It was a vaudeville house for a short time, opening with the play “Romance” starring Vaughan Glaser and his Company. By 1918 it was screening silent films.

Kunsky had Vitaphone installed in 1927 and the Adams Theater’s silent days were over. By the 1930’s, it was run by the Chicago-based H & E Balaban chain, and received a remodeling in May 1935.

The Adams Theater was one of the earliest Detroit houses equipped for CinemaScope – installed for the 1953 feature “The Knights of the Round Table”. Five years later, MGM Camera65 was installed.

H & E Balaban sold the Adams Theater to Community Theatres in 1963, and it received a modernization at that time to the plans of architect Ted Rogvoy. In the late-1960’s and early-1970’s, the Adams Theater started to screen exploitation and adult films.

In 1988, hoping to bring new life to the aging theater, it was triplexed. However, outside forces would doom that strategy. In that same year, tragedy struck twice at the Adams Theater. First, a man was murdered in one of the auditoriums, and later that year, two teenagers were wounded during a shootout before a movie in front of the theater.

The Adams Theater was shuttered in November of 1988, with “Halloween 4: The Return of Michael Meyers” and “Messenger of Death” being the last films on its marquee.

The Adams Theater was demolished in June 2009.

well, I’m going to go ahead and disagree with that statement, the theatre was last used in 1988, and sat vacant and unused. Ilitch bought it in the mid 90s, and it was probably well on its way to being a wreck by then. I have said repeatedly that if you are going to save a theatre you have to use a theatre, and in our city, with all of the fine theatres that have been saved there was no obvious market for the Adams. The place was kind of plain when new, cobbled in the 1940s in an attempt to modernize, the exterior got the Community theatres “shiny stone wall” treatment like they gave the Redford, both in 1963 and I’m afraid that If an old theatre was going to go, this one was the best candidate. I fear the United Artists is next, and there isn’t enough money anywhere to save that one, and again, how is it going to be used, to earn its way. The UA was much more impressive than the Adams, but that poor place never stood a chance after AAA (auto insurance co.) stripped the theatre as they were building their surburban office center the would move to, vacating the UA building.

Image showing just how far gone the theatre was:

New photos I took on May 29 2010. of what was there, the empty lot across the alley, the supported front ofthe fine arts building…

According to Mr. David Junchen’s “Encyclopedia of the American Theatre Pipe Organ”, pgs. 165 and 167, the Adams theatre had a 3 manual, 28 rank Hillgreen-Lane theatre pipe organ (opus 518) installed in 1918, at a cost of $5,400. This organ had a 5 horsepower blower, serial #9354. Does anyone know where this organ, or its parts, are located today, or what happened to it?

Everything is new! reopening ad from May 2nd, 1935 in photo section.

In 1963 the Adams Theatre was taken over by a syndicate of three exhibitor groups, consisting of Irving and Adolph Goldberg’s Commumity Theatres, Wisper & Wetsman, and the Sloan family’s Detroit Suburban Theatres. The house would be operated by the Goldbergs.

The Adams was extensively remodeled later that year. The $250,000 project was designed by architect Ted Rogvoy. An article about the project (not illustrated, unfortunately) appeared on this page of the January 12, 1964 issue of Boxoffice.

A link with 11 photos of the Adams Theater.

The Adams never screened a film in MGM Camera 65, the first of which was “Raintree County.” MGM did not release this film in 70mm format. “Ben-Hur” was the other film from MGM in the Camera 65 process, and it was screened at the United Artists Theater. I suspect that the full Todd-AO screen at the UA was not used because the aspect ratio of the film, at 2.76:1, was wider than the Todd-AO aspect ratio. If the full width of the film was screened, then the upper part of the screen had to be masked, much as was done in neighborhood theaters when a CinemaScope film was screened. The film process subsequently was renamed Ultra Panavision 70. Later Cinerama productions used this process.