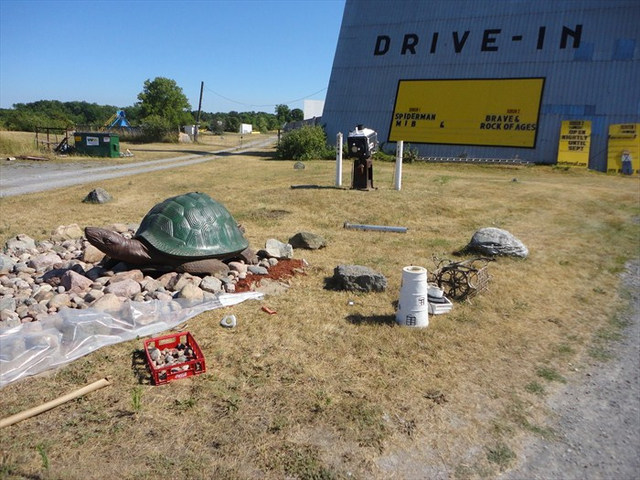 Located in Bloomfield to the west of Picton, ONT. Opened as the Picton Drive-In prior to 1956. It was renamed Mustang Drive-In in April 1956. A second screen was added in 2002. It is open during the summer months.

Paul Peterson bought the Mustang, seemingly on a whim after driving past its For Sale sign, in the summer of 1988. He’s owned and operated it ever since.

In his book A Good Day’s Work: In Pursuit of a Disappearing Canada, John Demont wrote that the Mustang opened in April 1956. But actually, it opened as the Picton Drive-In and later changed its name, probably reflecting an ownership change. The only other clues I have for when that happened come from my incomplete set of Motion Picture Almanacs:

Small update to the Motion Picture Almanac notes above: “Drive-In” switched to “Mustang” in the 1970 edition, so the name change was probably a year or two earlier.

Online at the Internet Archive, I picked up Tim Falconer’s 2008 book Drive: a road trip through our complicated affair with the automobile. His description of Paul and Nancy Peterson’s 1988 purchase matches Demont’s, but he adds more details.

“The property was in bad shape and the theatre had a reputation as a place for young people to get drunk and, he learned later, there had been a small riot on the last night of the 1987 season. Worse, the Petersons knew nothing about running a drive-in.” The couple cleaned up the place and most importantly, created and enforced a no-alcohol policy. That hurt first year attendance, Paul Peterson said, “but it worked because word got out: it’s not a dump anymore.”

The Petersons added a second screen in 2002, and as of 2008, their adult children were helping to run the Mustang.