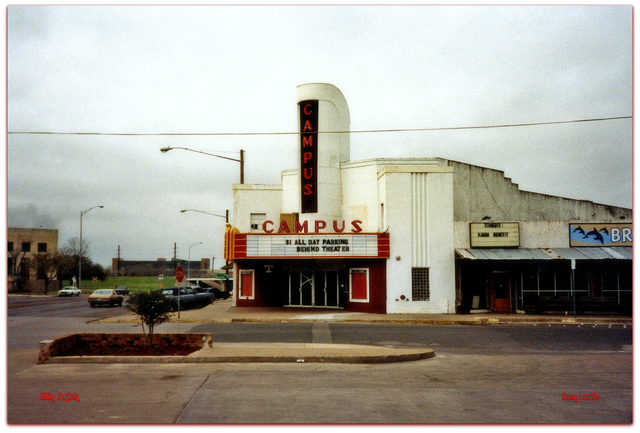 The Campus Theater opened in 1940, and was situated diagonally at the corner intersection of Farm to Market Road 60 (University Street) and Boyett Street.

It had the familiar, but colorful red and yellow trimmed marquee that extended out and came to a point. Atop the marquee “Campus” was spelled out in red letters with neon. Rising from the front of the building was a tall tower that also had red letters with neon spelling out “Campus”.

Photograph of the CAMPUS THEATER in College Station.

The April 13, 1940, issue of Boxoffice said that the new Campus Theatre in College Station was expected to open in about fifteen days. It was built by Ben Ferguson and Bill Underwood, but by 1961 it was being operated by the Schulmans, operators of the theaters in nearby Bryan, Texas.

I worked for Bill Schulman while I was in school, his family owned all the theaters in College Station and Bryan, the Campus and Circle Drive In (CS) and the Palace, Queen, Dixie, and the Skyway Drive In (Bryan). The Queen and Dixie had been long closed.

Brinkert projectors, Peerless Magnarc arc lamps, and motor generators to generate the DC for the lamps.

One thing I remember about the Campus was that at one time the Air Cond was run by a gasoline engine. It was a little scary to go down there to start the system, dark, dank, and lots of exposed moving things. Brrrr…

The theatre had faux art deco lighting fixtures on the side walls which were aqua tones and it had something you hardly ever see nowadays — a crying room in the rear of the orchestra. It had a balcony — probably around 150 – 200 seats. And although it was in a small town (at the time I was there that road you see in the picture was not paved — it was gravel), we still ran it with very high presentation standards. It had a main gray velour curtain that we used between the cartoons and attraction reel as well as amber curtain warmer lights. I grew up in Brooklyn so I knew how they did it in the flagship theatres in NY and we emulated that level of showmanship.

We ran first run and a lot of hold-overs — I remember we ran WHO’S AFRAID OF VIRGINIA WOLF and BLOWUP for three weeks, maybe more. To this day I can tell when a change-over is coming up without even looking for the cues. We did very good business because this, after all was BV (Before Video) so the only place the entire Texas A&M population could see a movie was at the Campus Theatre (the were “theatres” back then, not “cinemas.”)

When I was there, Doc, we were running Simplex Supers. I don’t know if you were there before me or after, but the heads definitely were Supers. Yes, Peerless Magnarcs and DC generator, but it was a single generator, not the usual two. When you struck one arc, it would light, but you would see the outgoing machine’s light dim a bit. Trick was to get that other lamphouse out as soon as possible so the incoming projector would get full power.

If you want to know scary, at that time we were still using the old Tushinski Superscope variable anamorphic lenses. However the booth was constructed in such a way that it prevented the projectors from being moved any farther back from the port windows to accommodate the very large and bulky Superscope lenses which were much larger than the standard lenses. On Projector #1, you could maneuver the Superscope lens into the projector by carefully holding it at a certain angle. But for Projector #2, you had to hold the lens with your right hand, pass it OUT OF THE BOOTH thru the view port and with your left hand thru the projector port, pull it back into the booth and into the projector. My deathly fear was that one day doing this maneuver, I would drop the very heavy cast metal contraption on some patron sitting below and kill them.

Our second projectionist who was a woman named Peggy (I am embarrassed that I can’t recall her last name) was the only woman projectionist in Texas, at least that was what I was told, so I can’t verify it for sure. She would leave me sandwiches and soup when I would come in for the night shift. It was a great place to work.

All the Aggies knew what would play Friday midnight so there was never any advertising or promotion of any kind, just an A-frame out front all day announcing “Midnight Show Tonight.” The place was always packed. These edited version were cut in such a way so that as soon as anything salacious was about to happen on the screen, —SNIP!— and the scene would jump to something less exciting. The all-male audience, at least 90% A&M lads, would hoot and holler and stomp on the floor, but would come back every Friday night. Mr. Schulman said with that one show we would made up for any other slow night.

It was a wonderful experience and working with warm, generous people and SHOWING MOVIES — what more could a kid want?!

When Bill Schulman’s family planned his memorial, they chose a reception venue that they knew he’d approve of: A movie theater.

Schulman, a longtime Bryan resident who was born into the theater business, died last week (May 7th 2013) under the care of Hospice Brazos Valley. He was 86. His life was honored during a funeral in Crockett on Sunday and celebrated afterward at the Ritz Theater, which Schulman owned and where he worked up until his hospitalization about six weeks ago.

Craig Schulman, one of Bill Schulman’s three sons, said he and his brothers were working to plan a celebration in Downtown Bryan in the near future.

The local setting is also appropriate for a memorial. Bill Schulman’s family moved to Bryan in 1926 when he was six weeks old and, shortly afterward, purchased the Queen and Dixie theaters on Main Street in Bryan. Two years later, they opened the Palace Theater on the same street. By the time all three theaters were closed in 1985, Bill Schulman and his family had already invested in multi-screen complexes.

In November 1974, Bill Schulman opened Manor East III Theaters in what was the Manor East Mall at the corner of Villa Maria Road and Texas Avenue in Bryan, the current site of the Tejas Center.

In an Eagle article from Nov. 6, 1974, the multiplex was described as “the first triple-auditorium in the Bryan area” and was capable of “playing three separate features all at the same time.” “All types of food and soft drinks will be served along with the standard move fare of popcorn,” the article states.

The Schulman family also operated several drive-in movie theaters and multi-screen cinemas in town. When asked by an Eagle reporter in 1974 if he believed TV was hurting the movie business, the then-48-year-old Bill Schulman replied: “TV hasn’t hurt us, only in the adult trade. The kids and the teenagers still come, and they will keep coming as long as you provide good entertainment.”

Bill and Morris Schulman donated The Queen to a Downtown Bryan revitalization group in 1991 in hopes that it would be renovated, and two days before his death on Thursday, the theater reopened for the first time in more than four decades.

Even while in the hospital, Bill Schulman was at work helping decide what movies would be booked at his Crockett theater.

“He loved people and that’s why he loved the business so much,” Craig Schulman said.

Schulman is survived by his wife, Christine Schulman, sons Craig, Morris and Mark Schulman, along with their wives and several grandchildren, great-grandchildren and other relatives.