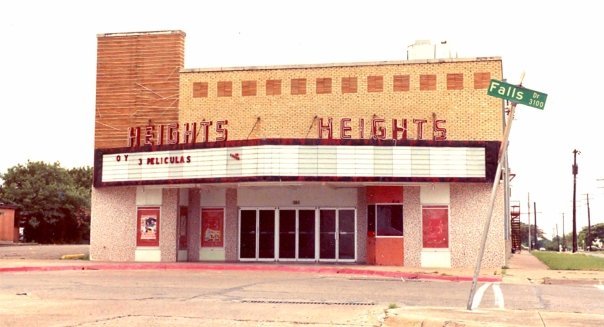 The Heights Theater was a colorful, classic stand alone building, built in 1949. It had the typical marquee across the front coming out to form a point that sheltered the entrance and ticket booth. The marquee was trimmed in red with neon. “Heights” was spelled atop both sides of the marquee in red letters and neon tubing.

This theater was located in the Heights Shopping Center and was near the corner of Falls Drive and Searcy St. I believe, at one time, there was an A&P Grocery Store across the street.

Thanks for your comments Michael!

It was a church after being a theater. It was a theater until at least 1972 or so. Not sure after that, but I think it was a Spanish language theater for a bit. It most likely became church after that time.

I went to many “Kid Shows” there on Saturday mornings during 1950’s.and 1960’s. My friends from Margaret B. Henderson Elementary School would meet there and see such movies as “Beast from 20,000 Fathoms”, and “House on Haunted Hill.” My brother John White worked there as a projectionist on his days off from working at the Wynnewood theater.

Hello Mark W. Would you mind contacting me at your convenience concerning the Heights Theater? Thank you!

The February 19, 1949, issue of Boxoffice Magazine said that Robb & Rowley Theatres had asked for bids for construction of the Heights Theatre. The new house adjacent to the Westmoreland Village shopping center was to have 800 seats.

another 1992 photo of the old heights theatre. it can be seen here
View link

Looks like they’ve used some of the original “HEIGHTS” lettering to spell out “IGLESIA.” Seems like it’s been a church more than twice as long as it was a theatre.

My grandparents lived directly behind this shopping center, therefore, I have several photos of it right after it was built …most are before the actually shopping center was built…only the theater and the 7-11

The Loupot Heights neighborhood in Oak Cliff within Dallas was established by Herman Loupot who also created the million dollar shopping center known as the Westmoreland Village in 1949. The Heights Theater was in the original construction plans for the shopping center and was architected by Pettigrew, Worley & Co. The 800-seat theater was designed to serve the immediate 10,000 residents within the Heights neighborhood.

The Heights Theater opened for Oak Cliff specialists' Robb and Rowley Theatre Circuit on October 28, 1949 with “The Girl from Jones Beach.” It had a crying room for kids and “bodiform” cushioned seats. The theater played suburban fare for 12 years before Rowley United (the partner, Robb, had passed away) decided to concentrate on its other theaters, particularly the Wynnewood.

In 1961, Rowley United subleased it to a new operator, E.W. Savard, who ran the Heights as an independent for two years and closed it. Rowley United decided to refurbish the theater reopening it June 3, 1965 as the “new” Heights playing, It’s a Mad, Mad, Mad, Mad World.“ Since Rowley had acquired the Isley Circuit earlier in the year, it eventually divested itself of Isley’s Avenue, Crest, Kiest D-I, and Big D and — later that year — it subleased the "new” Heights to another owner in 1965 who operated it as an independent. That operator survived negative publicity when fumes in the newly reopened theater sickened people and sent them to the hospital.

The Heights closed again under the second independent operator and Rowley United — now called United Artists — resumed operation from 1968 through its last showing which was October 31, 1970 with a double feature of “The Love Bug” and “The Jungle Book.” In 1971, the Heights became a Spanish language theater for a period of time. The theater’s name was changed out becoming multiple houses of worship one of which was still in operation in the 2010s more than 60 years after the theater’s original opening.