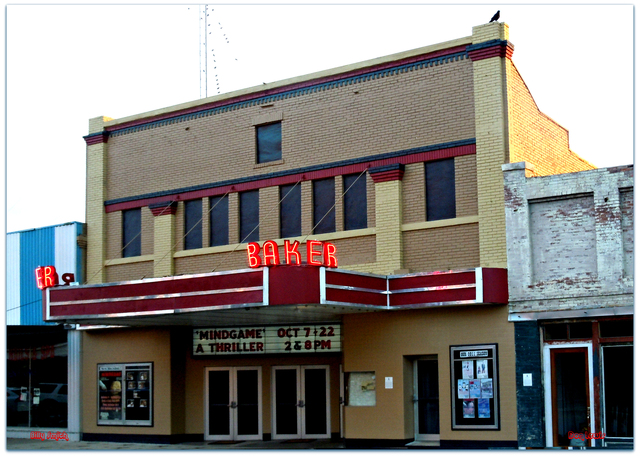 The Baker Theatre opened in 1920. It showed its last movie in 1984. The theatre was acquired in 1997 by the Lockhart Community Theatre and reopened in 1998 with a live production of "Steel Magnolias". The theatre continues to serve as a venue for live theatrical productions as well as concert events and is now known as the Gaslight Baker Theatre.

Here is a June 1972 item from the Lockhart Post-Register:

The Baker Theater now has the newest thing in sound equipment, says Mrs. Anne Valentine, theater owner. The theater is switching over from the old-fashioned photo-cell method of sound reproduction to the modern and much improved solar cells. Photo-cells depend on electric current to make them run and thus introduce a noise factor in the reproduction of the sound track. The new solar cells depend entirely on the power of the light beam which shines through the sound track on the film, and thus gives a more clearer reproduction with a minimum of distortion.

The new equipment was installed in the theater last Friday by Bill Emerson of Altic Service Co. with the help of projectionists Jesse Garcia, Oscar Hernandez and Salazar TV Service. Another change at the Baker will be removal of the majority of the seats in the balcony. They are being replaced by shag rugs for people to sit on. Mrs. Valentine explained that she saw a similar set-up in Las Vegas on her recent trip and had decided to modify the balcony area in the same way. She added that removing the seats would also be a money-saver, as she would no longer have to repair the constant cuts and tears which appeared in the balcony cushions.

From 2011 a photo of the Baker Theater in Lockhart.

Does anybody have anything on Sky-Vue Drive-In which was open in the 1950s in Lockhart?