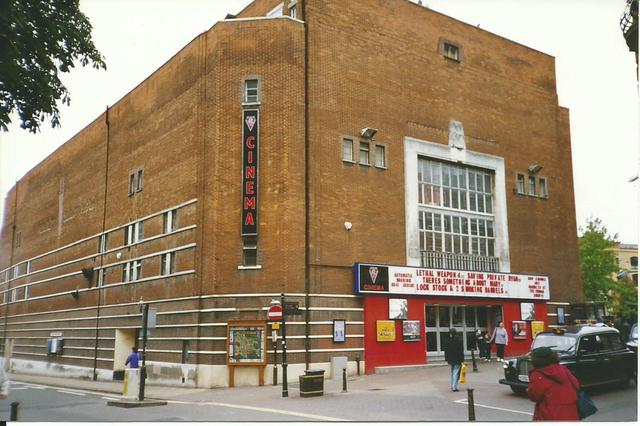 Originally on this site stood the Cinematograph Theatre (1912-1935) which has its own page on Cinema Treasures. It was demolished and the new Ritz Cinema was built on an extended site. Designed for and operated by Union Cinemas, the Ritz Cinema opened on 20th April 1936 with George Arlis in "The Guv'nor".

On the façade was a large centre window, above which was a carved figure in bas-relief by designer Newbury Trent. There was a similar figure inside the auditorium. Each side of the proscenium were niches containing hanging light fittings. Seating was provided for 1,654 in stalls and circle. The Ritz Cinema was equipped with a Compton 3Manual/6Rank with Melotone attachment organ, which was opened by Alex Taylor. There was also a café provided for the convenience of patrons.

Union Cinemas were taken over by Associated British Cinemas(ABC) in October 1937. In 1959, the Ritz Cinema was equipped to present 70mm Todd-AO films on a screen 50 feet wide and 20 feet high. The first film to be presented in this format was “South Pacific” on 22nd February 1959. The Ritz Cinema was re-named ABC in March 1963.

A few days after it had been renamed, on 12th March 1963 the auditorium was badly damaged by fire. It re-opened in October 1963 with Elizabeth Taylor & Richard Burton in “The V.I.P.’s”. It had a much plainer decoration and drapes on the wall, the architects responsible were Don Berry and Jack Sutton. The Compton organ was removed at this time and sold back to the John Compton company for spares. On October 15, 1967 the World Premiere of “Dr. Faustus” took place, with Elizabeth Taylor and Richard Burton in attendance.

In May 2010, new seats were installed and the cinema was given a re-vamp. Seating capacities have been reduced to 187 down to 84.

the lease runs out on the building later this year and the site is scheduled for demolition to be replaced by shops, a huge shame as its a great deco exterior

There seems to be a stage and extensive dressing room accommodation at the rear in this shot.

Although the exterior is in good shape the interior is a typically botched Odeon conversion with sound bleeds from the circle minis into the cinemas below…avoid !!

The seating capacities in the overview at the top of this page need updating, the current numbers (directly taken from Odeon’s website) are:

All auditoria contain Premier seats situated in the middle of the auditorium.

Recall seeing a Superman triple-bill in the old, much larger, screen 3 many years ago. Back in the days when you queued around the block to purchase tickets from the box office on either side of the front foyer immediately prior to the performance you were attending. It had a relatively large curved screen plus curtain tabs. Screens 2 & 3 were very small and even as a child seemed not much bigger than a home projector screen!