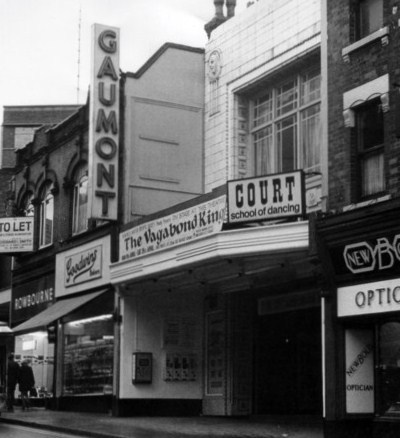 Located in the town of Hanley, one of the Potteries towns that surounds Stoke-on-Trent, Staffordshire. The Regent Theatre was a project of Provincial Cinematograph Theatres, but that company had just been taken over by Gaumont British Theatres when it opened on 11th February 1929. The opening programme was Emile Jannings in "The Last Command", with a variety show on stage, and the Wurltzer 2Manual/9Rank theatre organ was opened by Mr E. Felton Rapley.

The main entrance on Piccadilly was set back from the street. The name ‘Regent’ was set high up on the white faiance tiled facade, and there were masks of comedy and tragedy. There was a large foyer, decorated in an Art Deco style and above this was a large restaurant.

Inside the auditorium the seating was provided for 1,372 in the stalls and 812 in the circle. There is a double dome in the ceiling, and the projection box was located at the back rim of the lower dome. The organ chamber was located above the proscenium arch.

It retained the name Regent until 24th September 1950 when it was re-named Gaumont, usually playing the Gaumont release. The organ was removed in 1972 and by then the restaurant had closed. In May 1974 the Gaumont was sub-divided into a triple screen cinema, with the main screen using the circle and front stalls areas with seating for 1,137. The two mini-screens under the circle in the rear stalls seated 159 each. From 6th June 1976 it was re-named Odeon, after the town’s original Odeon had been closed in November 1975.

The Odeon closed on 12th October 1989 when the new eight screen Odeon multiplex opened at Festival Park. The building was designated a Grade II Listed building by English Heritage from 30th November 1989. On 18th January 1994 the unused/empty building’s Listed status was raised to Grade II* Listed.

Soon afterwards, the building was purchased by the City of Stoke-on-Trent and the architectural firm Levitt Bernstein were employed to begin a renovation to create a modern live theatre for the town. A new enlarged stage was built, which extended into the old auditorium space. This entailed removing the original proscenium arch and creating a new one in a similar syle. Sections of the splay-walls next to the old proscenium were also removed, thus, shortening the length of the auditorium. The foyers were modernised and the former restaurant space became a function room. The Regent Theatre re-opened in September 1999 as a single auditorium again and is operated by the Ambassadors Group.

Some older pictures of the Regent when it was an Odeon triple here:–

Not sure what happened there! Continuing,

A few more recently scanned images of the Regent, operating as an Odeon triple, in 1989 here:–