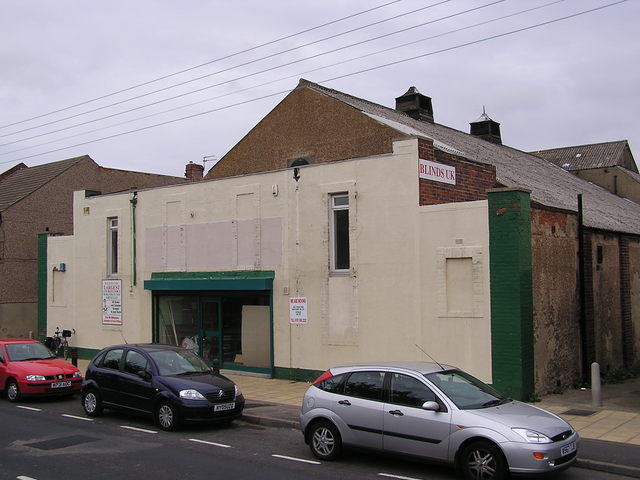 Located in Horden, County Durham. The Ritz Cinema opened just prior to Christmas, 1937. It had seating for 850 in stalls and a raised stepped section at the rear, later reduced to 716. There was full stage and fly-tower and a proscenium arch 23 feet wide. The Ritz Cinema was closed in the early-1960’s and was converted into a bingo club.

It was modernised in 1972 when the Durham City based company FairWorld purchased the Ritz Cinema and it was reopened as a cinema. It was closed for alterations in January 1976 and re-opened as a twin cinema seating 240 and 135, as the FairWorld Film Centre in February 1976. Conversion work was carried out by Modernisation Ltd., a company founded by the Freise-Greene family. Seating was later reduced to 156 and 96.

Still operating in the 1990’s, it closed on 5th September 1993 with Sylvester Stallone in “Cliffhanger”, and became a factory/warehouse for Blinds UK. This too closed and the building became derelict. By September 2018 it was in retail use as Coast Road Fishing Tackle & pet shop

One exterior photograph from the 70s here:–

This was a stadium cinema with no overhanging balcony but with a raised section at the rear of the auditorium.

Sometime in the early 1960’s the Ritz had gone over to bingo and the 1972 modernisation was carried out for its return to films.

I did a couple of stints here as relief projectionist around 1977/78. It may have been Graeme who got a night off when I did as the movies he stated in the link to one of the pictures were ones I showed at Fairworld. I was just a trainee at the time and spent a lot of time mainly between the Fairworld cinema’s in Washington and Sunderland but did a bit here and at the Seaham branches. Always a dash at the end of the night to catch the last bus home. The Horden projection box was really quite nice and the staff popped up a couple of times with a cuppa and to make sure the trainee was still alive!! I think when we look at cinema’s we forget the family atmosphere that the staff generated and when these places closed a lot of people had developed bonds and kept in touch through the years. Good times!

The Fair World Film Centre closed on Sunday 5th September 1993. One of the final films was “Cliffhanger”, starring Sylvester Stallone.