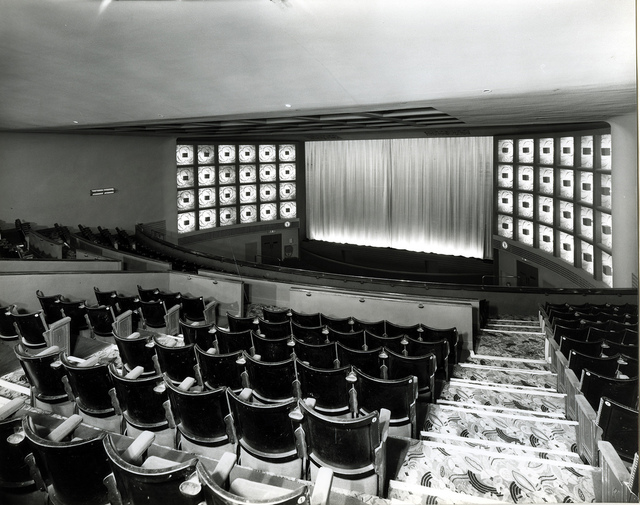 Located in Esher, Surrey. Built for the Shipman & King circuit, the Embassy Cinema opened on 23rd August 1937 with Greta Garbo in “Camille”. The cinema’s entrance is set slightly off-centre to the parade of shops and flats to which it is flanked on each side. The exterior design is Neo-Georgian style in brick and above the canopy there are tall round-headed windows which allowed light into the first floor cafe. The lavish interior decorations in an Art Deco style are the work of interior designers Mollo & Egan.

An unusual aspect of the Embassy Cinema is the ‘double rake’ in the stalls floor. The floor slopes down towards the screen as normal, then at a point halfway down, it slopes up at a steeper angle towards the screen. Seating was provided for 1,200 in stalls and circle. There was a stage 12 feet deep and five dressing rooms. The proscenium opening was 42 feet wide.

Shipman & King were taken over by EMI and during their ownership, the cafe was converted into a second screen with seating for 117. EMI were taken over by the Cannon Group and it was re-named Cannon in 1986. In 1996 ABC Cinemas (in the form of a management buy-out) took control and they re-named it ABC. In 2000, Odeon Theatres took over and it was re-named Odeon. In July 2001, the main auditorium was sub-divided into three screens. The main screen uses the circle seating area with 518 seats, and the two minis seating 114 and 112 are located under the circle. In April 2015 it was announced that the Everyman Cinemas chain would be purchasing four Odeon’s: Esher, Gerrards Cross, Muswell Hill and Barnet.

The Odeon is a Grade II Listed building.

The Embassy closed for a few days in the mid 1970’s to enable ‘Sensurround Sound’ to be installed. It re-opened with ‘Earthquake’, which I was lucky enough to see on opening day. This also represented an early instance of ‘separate performances’ in an out-of-town venue. Following all the hype, I well remember queueing outside, as well as feeling the rumble through all the closed doors, with a certain amount of trepidation. Don’t forget that, at this time, sound quality often wasn’t great, and the employment of subwoofers in local cinemas was unheard of.

The extreme LF content of the soundtrack was certainly impressive as a part of THIS movie’s experience, as it was for ‘Battle of Midway’ – for obvious reasons. ‘Rollercoaster’ also employed a sensurround track, but this wasn’t so effective. Also, by the time that movie was released, ‘Star Wars’ and ‘Close Encounters’ were on the scene, and audio quality in local screens was improving rapidly.

Oh it really was rather wonderful. I remember the staircases and foyer adorned with gorgeous framed tinted pictures of Troy Donahue, Annette Funicello and our very own Hayley Mills. And there was a Boots lending library right opposite which survived long into the era of the free public ones.

My schoolfriend and I, both 15, spent a sunny afternoon at Esher cinema in summer 1993 watching Cliffhanger. It was in screen 1 (prior to its division) and my friend and I were the only two in the huge auditorium!

Very nice it looks too! Even red screen tabs to complement the lovely decor and seating. Everyman did the people of Esher a great favour by rescuing this theatre from Odeon………..

The Embassy cinema was part of my childhood, as we lived in Oxshott. I saw my first film there in 1950 – I was 6, the film was Ivanhoe. During the next 7 or 8 years we went at least once a month by bus and saw so many great films – big musicals (Oklahoma, Carousel, 7 Brides for 7 Brothers,High Society, Gigi) Danny Kaye (Hans Andersen, The Court Jester)Richard Todd (Robin Hood – we had to queue for that one,in 1952- Yangtse Incident, The Dam Busters)– English classics (Pickwick Papers, Julius Caesar, Hobson’s Choice, A Tale of Two Cities) – gritty dramas (The Colditz Story, Dunkirk, Carve Her Name with Pride, Bridge on the River Kwai,Reach for the Sky, Ice Cold in Alex, The Nun’s Story) and many more. My idols were Richard Todd, Kenneth More and Dirk Bogarde. There were always two full-length feature films, the second being in black and white, usually a Western or thriller, plus a Pathe newsreel, also black and white, and lots of trailers for forthcoming films. Our bus times usually meant we arrived halfway through the second feature, but the programme ran continuously so we just sat there until we got to the bit where we came in! Don’t let anyone tell you that we were starved of entertainment in the 1950s – it’s not true.