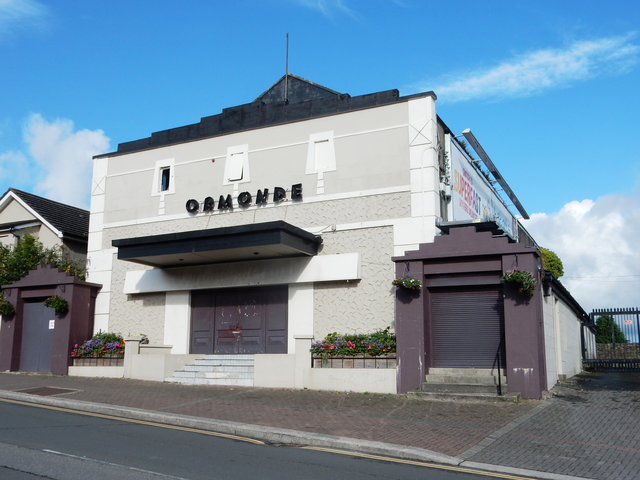 Listed in the 1939 edition of Kinematograph Yearbook (it’s not listed in 1937) with a seating capacity of 600. It was part of the Ormonde Circuit of Irish cinemas. Occasional variety was booked and the proscenium was 25 feet wide, the stage 20 feet deep and there were two dressing rooms. Closed its doors in the early-1980’s.

Re-opened again in 1988 as part of the Ward Anderson chain. It was twinned in that year.

It closed again in 2003 and was sold to developers who planned to open a 5 screen multiplex on the site, possibly retaining the facade. Following many planning objections the site still remains idle. The empty building was damaged by fire on 28th February 2016.

That Ormonde is in Greystones, not Arklow

The Ormonde Cinema in Greystones is also closed, after operating in the balcony area of the original cinema only for some years. A funeral parlour shared part of the stalls in the latter years.

The closure of the Ormonde, Greystones got a fair amount of publicity, as the cinema is used in brief exterior series of shots in an episode of the TV comedy series “Father Ted”. Without giving away all of the plot, the efforts of Fr. Ted and Fr. Dougal to protest (under instruction) about an “unsuitable” film have a perverse effect!