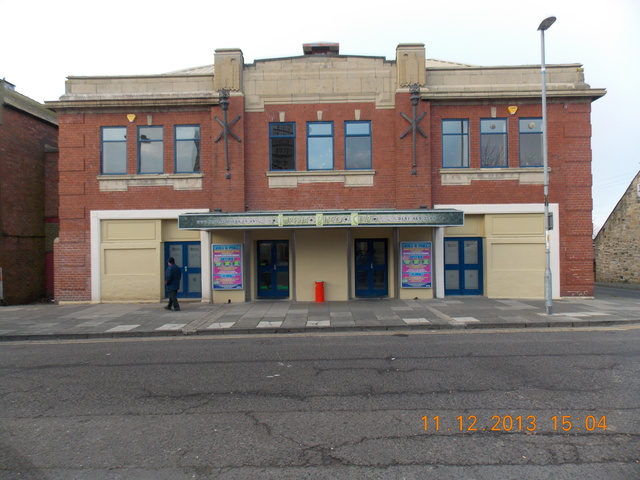 Located in Felling, a southern district of Gateshead-on-Tyne. The Imperial Cinema on Wellington Street opened on 7th November 1910 and had a seating capacity of 700. In July 1915, architect J. Newton Fatkin prepared plans to erect a cantelevered circle to the building and re-rake the stalls floor to increase capacity. These alterations were completed by August 1916. A waiting room was added below the circle in December 1919 and in around 1923, the name was amended to Imperia Cinema. On the night of 1st October 1929, the Imperia was gitted by fire and was considered too damaged to be re-built.

In 1928, the owner Joseph Smith had built the Imperia Palais de Dance at Victoria Square. It had a balcony for spectators and made an easy conversion into a cinema. No architect is credited with the conversion but the circle seated 210 and the ground floor seated 766 in Pit, stalls and rear stalls, all seperated by barriers.

The New Imperia Cinema opened on 25th August 1930 with Janet Gaynor in "Sunny Side Up". In March 1932 a cafe/lounge opened in the cinema, which also offered dancing. There were stage facilities in the cinema, and these were used for a week each October by the Felling & District Amateur Operatic Society.

The Imperia closed on 24th February 1962 with Walter Pidgeon in "Voyage to the Bottom of the Sea", and it became a bingo club now operated as an independent Top Ten Bingo Club.

In 1986, the New Imperia Cinema was designated a Grade II Listed building by English Heritage.

Thanks Lost Memory. That photograph is just a small section of the current New Imperia Cinema (the second building).