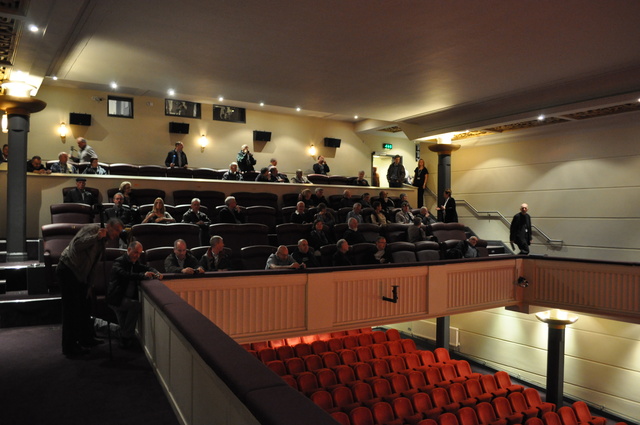 Opened as the News Theatre on 1st February 1937, as its name suggests its programming was newsreels, documentaries, short subjects and cartoons. Programmes were continuous and were of 75 minutes duration. It was initially refered to as the ‘Bijou News-Reel Cinema’ and was a project of local Newcastle film exhibitor Dixon Scott, the great uncle of film directors Sir Ridley Scott and Tony Scott.

Externally, the building looks like a regular office building, and the cinema entrance is on the corner, with shop units adjacent at street level. A 54 feet long arcade led patrons to the box office and actual cinema entrance. Inside the decoration is in an ancient Persian style with touches of Art Deco style. There are inticate mosaic floors in the entrance and circle foyer floors. Seating was provided for 412, with 252 in the stalls and 160 in the balcony, which has a single row of seats located on each side in the side slips which extent towards the proscenium. Above the auditorium were public coffee rooms and also a private cinema.

The News Theatre closed in March 1968, due to the end of production of cinema newsreels. It re-opened on 17th March 1968 as the Tyneside Film Theatre which was supported by the British Film Institute. The opening film was the controversial Swedish sex comedy "Hugs and Kisses" The new name brought about a new policy of screening art house, independent and classic films.

The Tyneside Film Theatre closed in 1975, but was re-opened in 1976 with new operators as the Tyneside Cinema. Several changes have been made over the recent years to the entrance and its canopy. In November 2006 the Tyneside Cinema was closed as work began on a restoration of the interior of the building to the plans of architectural firm Fletcher Priest Associates and the addition of 2 more screens. The operation was transfered to the Town Hall, Gateshead while this work was being carried out.

It re-opened on 22nd May 2008 with two screens added. The original auditorium is known as the Classic and the new auditoriums are named the Roxy & Electra.

In October 2000, the Tyneside Cinema was designated a Grade II Listed building by English Heritage.

Here are a set of 21 vintage photographs (click on each number):
View link

When I visited the Tyneside Cinema in 2003, I was shown around the Projection room and reel-to-reel changeover projection was still in use here. The projectors were either Philips DP70’s or DP75’s but I am not sure which. They still used Carbon-arc lamps for the light source but I do not know if this is still the case now as they may have updated it during the recent refurbishment.

Four interiors shots here, showing the circle foyer, and each of the three screens. Taken June 2009.

As the Tyneside Cinema in the 70s and 80s, as well as showing films, they would also invite personalities to be interviewed. I attended talks with such disparate figures as David Puttnam, Don Boyd, Elizabeth Welch and Barbara Windsor. The then film critic of the Guardian, Derek Malcolm also came to give a talk.

As well as the main auditorium, there was also a smaller cinema upstairs which was originally, I believe a lecture theatre but when the Tyneside Film Theatre opened became the members theatre, but was subsequently licensed for public exhibition as cinema 2. With two cinema screens, they were able to show a wide range of films. Sometimes they would show seasons of a particular genre, e.g. gangster movies such as Little Ceasar and the original Scarface. On one occasion I saw the Buster Keaton silent classic, The General with piano accompaniment. When Elizabeth Welch came to be, interviewed, after the interview they showed Song of Freedom which she had made in 1936 playing opposite Paul Robeson. Cinema 2 was rather plain, but it was the films that were important here.

Photos of the glorious Tyneside from 2014 EXTERIOR

I can remember going to this cinema in the 60’s just to watch the cartoons, there was another news cinema at the Haymarket end of town, I think it was called the Tatler.

I worked here from 1994 to 2006. The photo of the stalls area predates the removal of the Tannoy PA columns c.2001 (some patrons actually thought they were used for films). Projection was Philips DP75 with Peerless Magnarcs burning Marble Double Eagle carbons (supplied by Jack Roe).

Photo of the cinema as the ‘Bijou News Theatre’ upoaded.