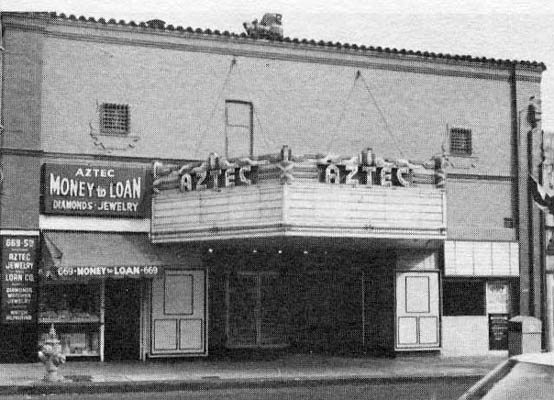 P.S. When Andy and Charlie bought the Aztec, they bought it from the Russo (sp?) family. Preferred had gone out of business. I distinctly remember Mr. Walker commenting that they had done him out of his retirement when they went out of business.

The San Diego Reader has compiled all the Walnut articles onto one webpage, along with around 100 graphics and photos that never appeared in ANY of the published versions. Also included is a Pussycat Theatre mini-history, updates on various Walnut-related lawsuits, etc.

RE the Aztec, there’s a new addition to the article that refutes some info in the book that says Black Dahlia murder victim Betty Short saw a movie at the Aztec and stayed with an employee just before going to LA and getting killed. An old newspaper ad reproduced on the Reader page shows the ACTUAL movie Short saw, which was not the movie listed in the book – in fact, very oddly, Short saw “The Blue Dahlia” at the Aztec just before going to LA! A hitherto unknown and fascinating fact that Black Dahlia buffs will want to check into ——– the old Aztec ad was found and provided by blogger myspace.com/sandiegocinerama, where a BUNCH of old Aztec ads (and ads for other San Diego theaters) are scanned.

The Aztec and an adult theater next door can be seen in this 1984 photo:
http://tinyurl.com/deub3a

There is a photo of the current occupant on this page:
http://tinyurl.com/c25r3w

This view of the Aztec is from 1983:
http://tinyurl.com/cfrlzc

I saw Psycho II when it was released in 1983. It was a disappointment, but what would you expect?

Here is an undated photo:
http://tinyurl.com/nu4sme

As the 1950’s-60’s arrived, The AZTEC THEATER was one of the many theaters below Broadway then, which were “open all night”, and showing “3 BIG FEATURES” with a program change twice a week. Don’t know what it looked like before then, but it was as pretty much of a DUMP in comparison with ANY of the other theatres, ANYWHERE IN TOWN. The entire floor was one big slant, stadium style, with one entrance in the center, and it was without a balcony. The only CLASSIC thing left by this time was the marquee, hardly big enough for 3 movie titles-but they managed to spell out MOST of them with a squeeze! Along with it’s next-door-neighbor the CASINO THEATER-they were two of the OLDEST theaters in San Diego, and both were ‘gutted-out’ of their original buildings in the GASLAMP re-vamping of the area, last century. The space presently serves purpose for other tourist-attracting ventures. I thought they had SAVED the CASINO’s ORIGINAL YELLOW MARQUE until I read somewhere that it’s a REPLICA!(I don’t know though—it looks like the ORIGINAL to me!) Yes, 5th AND G streets has, indeed, witnessed a few changes in the CENTURY PAST.