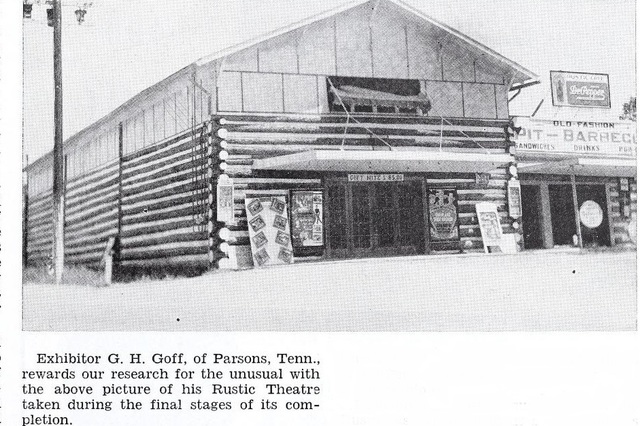 The Rustic Theatre was opened in 1937 by Hobart Goff. The theater closed in 1958 and was converted into a supermarket.

As the name suggests, the style of the Rustic Theatre was Rustic. In fact, it was built with logs. A photo of the house appeared in the November 11, 1939, issue of Boxoffice Magazine. Owner R.H. Goff claimed that the bark on the building’s log walls contributed to the quality of the sound in the auditorium. Boxoffice said the house had 480 seats.

I am G.H. Goff’s grand-daughter and would very much like to get a copy of the boxoffice magazine or get a copy of the picture and article that was in that issue. If anyone can help me , I would really appreciate it. Please e-mail me at

Here is the page that Joe was referring to:
http://tinyurl.com/y9vbzhk

Got here too late sadly its gone.