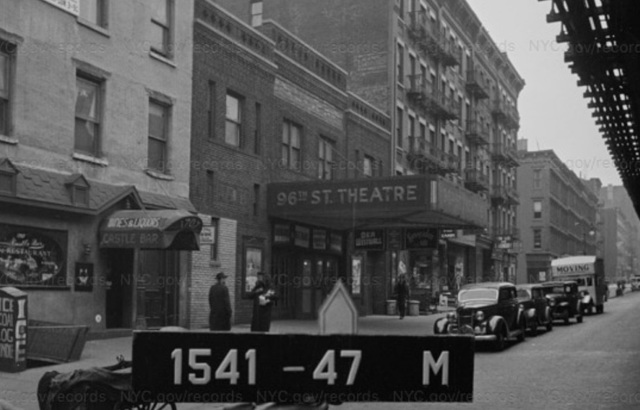 Two years later, it re-opened as the Yorkville Theatre, with 494 seats reported and showing "only foreign-made pictures." In 1936, the name changed again to National Theatre.

Anti-Nazi pickets chose the 96th Street Theatre as their favorite target. The largest demonstration came in May, 1941, when the 96th Street presented "Sieg im Westen" ("Victory in the West"), a documentary feature depicting Nazi Germany’s conquests of Holland, Belgium and France, as well as defeats and captures of British troops. Pickets from the German-American Congress for Democracy and the Non-Sectarian Anti-Nazi League paced the sidewalk in front of the entrance, waving placards such as "Down With All Dictators" and "Going to Nazi Theatres Helps to Undermine the American Defense System."

The local police station assigned five patrolmen to regular duty outside the theatre to keep order. Later that year, when the USA finally entered the war, the 96th Street Theatre closed for the duration.

It re-opened in 1946 with late-run domestic and foreign product, but closed permanently around 1949-50. The site is now occupied by an apartment building.

Warren,
I am the Yorkville/Kleindeutschland Historian. Have built a large exhibit now in the Congressional Record in Washington. Am writing a book on the history of 86th Street and have been all your wonderful postings. However, none of your photobucket photos from your 2005 postings are found on photobucket.
Would love seeing your photos so I can be accurate in my descriptions.
I am born in Yorkville and my parents came over in the 30s from Germany in the 30s. I would love to be able to visualize the wonderful stories they told me when they were among the pioneers in building Kleindeutschland.
I would be most grateful if you could help me see those photos no longer available.
Kathy

The New Third was already operating as that in 1923.

The earliest date mentioned above was 1926.

I have amendend the introduction text with details from the American Motion Picture Directory 1914-1915 edition.

This house might have been rebuilt, or perhaps the business moved to this address from another location, in 1921. This item is from the July 9 issue of The Moving Picture World that year:

A column headed “Incorporations” in the May 6, 1921, issue of Variety had this item:

The Manhattan New Building Database lists a permit issued for a theater at this address in 1921, and designed by Nathan Langer, but records it as a one-story building rather than two-story.

A house called the New Third Avenue Theatre was in operation in 1873, when it was advertised in the March 3 issue of The New York Clipper. No address was given, but it was probably not at this location.