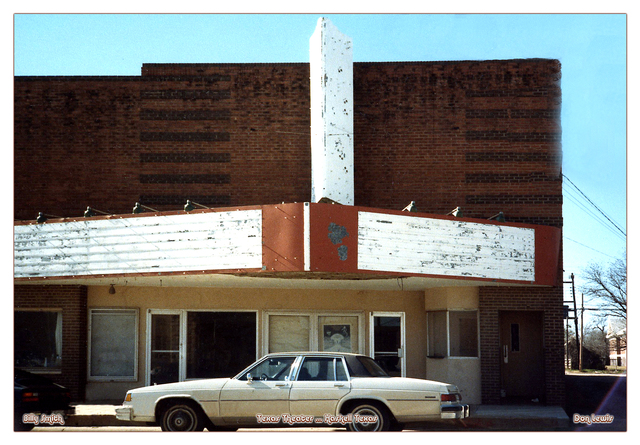 The Texas Theater was opened September 9, 1953. By 1955 it was operated by Frontier Theatres. By late-1986 the Texas Theater appeared to have been closed for some time, but seemed to be in fairly good condition. It was housed in a dark red brick building with a vertical white sign and “Texas” all but faded away . The white with red trim marquee sheltered the entrance and outside ticket booth. It had three of the familiar outside glass movie poster frames intact.

The photo on my posting was taken of a Texas theater 12/30/1986 in Haskell, probably 40 or 50 years later than the one on the Haskell website. They definitely not one and the same.

A December 1955 article in the Abilene Reporter-News stated that the Texas Theater in Haskell, damaged after a fire, was to be razed to make way for a new post office.

From Haskell a photo of the Texas Theater.

The August 27, 1953, issue of The Haskell Free Press had an ad saying that the New Texas Theatre would open on September 9 with the Ray Milland-Jane Wyman picture Let’s Do It Again. The ad boasted that the house would have the “First Wide Screen Installed In West Texas”. The September 3 issue of the paper confirmed the opening date and gave the location of the new house as Avenue E, ½ block from the northwest corner of the town square.

In the background of the vintage photo of the Texas Theatre uploaded by Don Lewis can be seen the distinctive side gable of the First Christian Church on Avenue F. With the clue in the newspaper article I cited in my previous comment there is only one location for the Texas Theatre- the southwest corner of Avenue E and the mid-block alley half a block north of 1st Street (U.S.380.)

The Texas Theatre’s site is now a parking lot and a small fenced side yard for the Haskell County Insurance Agency, which is at 103 N. Avenue E. The theater’s address would have been slightly larger, probably 107, assuming that the storefront to the left of the entrance was 105.

Adding a size note. The Exhibitor, Sept. 9, 1953: “At Haskell, Tex., the Old Texas, which burned last summer, is being replaced by the New Texas with Bumice Haley as manager. The 700-seat theatre is larger by 300 seats than the original theatre."

An item in the December 31, 1955 issue of Boxoffice revealed that the Texas Theatre and Sky-Vue Drive-In at Haskell were both owned by Frontier Theatres.