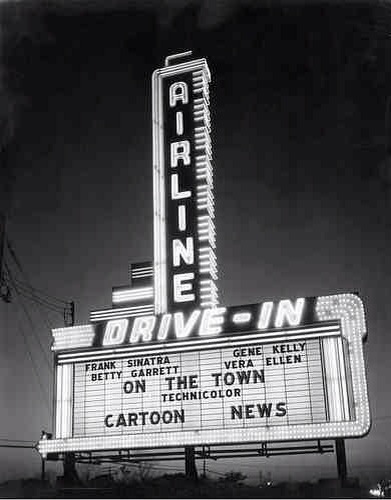 The Airline Drive-In was located at 4000 Airline Highway, across from the Joy’s Panorama Theatre.

It opened on January 25, 1950 with Randolph Scott in “Fighting Man of the Plains”. The Woolner Brothers (of B-movie fame) built this theatre. At some point in the 1960’s, it was sold to Gulf States Theatres, who operated it until it was closed and sold in 1980 to be a grocery store.

Manager from opening until about 1978 (if memory serves me right) was Sam Talley.

Here’s an ad for a movie playing at the Airline in 1963:
View link

Here’s a beautiful photo of the Airline Drive-In marquee with neon glowing in all it’s glory:
View link

THEREâ€\S ONE IN YOUR NEIGHBORHOOD
The History of the Neighborhood Theaters in New Orleans
is being written by 89-year-old Rene Brunet, the dean of the motion picture industry in Louisiana, and New Orleans historian and preservationist Jack Stewart. The 160-page,coffee table book will be released in November and is being published by Arthur Hardy Enterprises, Inc. Attention will be focused on 50 major neighborhood and downtown theaters, culled from a list of nearly 250 that have dotted the cityâ€\s landscape since the first â€œnickelodeonâ€ opened in 1896 at 626 Canal Street. The book will be divided by neighborhoods and will open with a map and a narrative about each area. Each major theater will feature â€œthen and nowâ€ photographs, historic information, and a short series of quotes from famous New Orleanians and from regular citizens who will share their recollections.
YOUR HELP IS NEEDED
We are trying to acquire memorabilia and additional photos of this theater for this publication. (deadline July 1.) You will be credited in the book and receive a free autographed copy if we publish the picture that you supply. Please contact Arthur Hardy at or call 504-913-1563 if you can help.

At the height of the Drive-In craze in New Orleans, the Airline was hugely successful. Not just for the movies, families brought their kids to have fun in the large playground directly under the screen; it was always packed and you often saw the same kids from weeks before.

As a young boy, at just four years old in 1957, I broke my wrist coming down the slide head first… No, there was not even a thought of suing the theater.

I can remember looking up at the huge 70' tall screen and being mesmerized with how gigantic it was. But being New Orleans, a city surrounded by swamps, it is the mosquitos that one remembers most; there was no getting away from them.

The Airline sat adjacent to the main railway heading West out of New Orleans, and trains, both freight and passenger, went by frequently; often blocking the entrance/exit to the theater and causing considerable frustration.

My last visit to the Airline was in 1975 and is somewhat unforgettable. After hours of ignoring the movie and fogging up the windows with my girlfriend, we failed to notice the movie had ended and everyone had left. The theater operator came with a flashlight and tapped on the window. This was only the beginning of our embarrassment because my 1956 Olds Delta 88 refused to start and required a jump. After that, my girl insisted we never go back.

Is it possibly the only drive-in the world to have the entrance(and exit?) cross a train line?