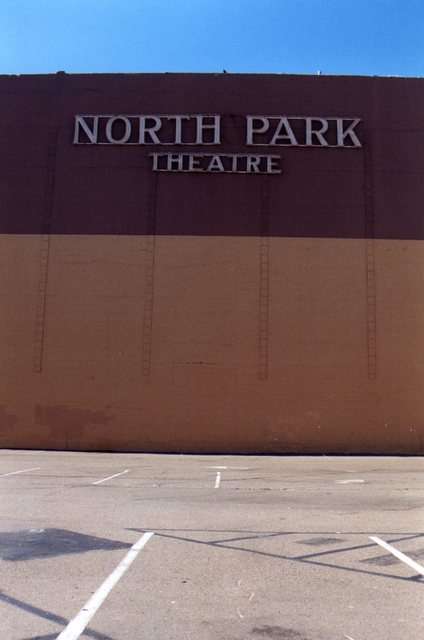 The North Park Theatre opened as a 1,200-seat theater on January 17, 1929 and was a popular movie house for over sixty years. It closed in 1989. After more than a decade of laying dormant, the theater was reopened as an 800-seat live performance venue on 30th September 2005 by the Lyric Opera San Diego .

The city had owned the North Park Theatre since 1990 and sold the old movie house to its redevelopment agency in order to complete a $900,000 structural and seismic retrofitting. After completion, the theater was then sold to a developer for $1 who were responsible for organizing a $2.5 million renovation and restoration project.

More specifically, this photo shows the marquee of the shuttered theater being used to advertise North Park’s Thursday Night Market, about which you can learn more here:

Interestingly, the farmers market had to move due to the new parking garage built specifically to support the rehabilitation of the North Park Theatre and continued redevelopment nearby!

For Fine Art images of the restoration of the North Park Theatre, visit www.holtwebb.com and go to the “Una Nuova Vita” gallery.

A limited edition of coffee table books were printed to commemorate the renovation of the theatre and were purchased by the Lyric Opera Board of Directors, the renovation architect, and the developer. A few copies are still available.

The North Park Theatre space is alive and well! On 25 July 2007, I ate dinner in the restaurant that now occupies the trapezoidal space that once was the entry to the theatre. Not only is this the current incarnation of a favorite restaurant, but a fine use of part of the space that was my late mother’s (and aunt’s) neighborhood theatre. On the night I visited, the actual performance area was “dark.” We were able to see the vestibule area, however, as well as the bar. Original architectural details, especially the ceiling over the bar are once again alive and full of color. The next time I am in San Diego I hope to combine dinner and a performance.

Now if only someone would be so kind to my childhood theatre, “The Hillcrest” (later “Guild”) on Fifth Avenue in Hillcrest. It is in sad shape these days. While never an opulently decorated theatre, it certainly had it’s own comfortable neighborhood ambiance.

A replica of this theater’s original vertical sign was recently installed: View link

I am trying to finf out what Theatre I saw the first run 70mm res. seat showings of West Side Story and King of Kings plus the 1st run of The Music Man in SanDiego.

KING OF KINGS had its 70mm run at the California in Downtown San Diego.

MUSIC MAN didn’t have a 70mm run, but its first run was at the Fox (aka Copley Symphony Hall), also in Downtown.

This opened on January 17th, 1929. The grand opening ad has been posted in the photo section.