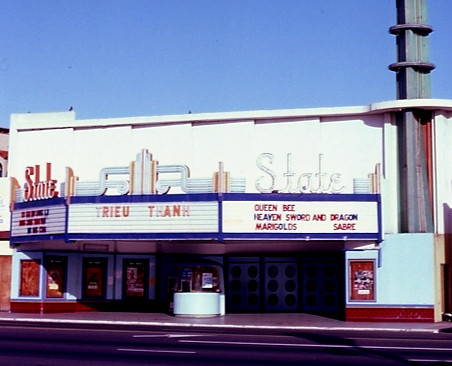 Built for and operated by Fox West Coast Theatres, the State Theatre opened on August 28, 1940 with Ronald Colman and Ginger Rogers in “Lucky Partners”. The State Theatre had beautiful murals adorning this sumptuous theatre’s auditorium walls, decorated by M. Chavalas, they were illuminated by ‘black light’. All seating was on a single level. Its exterior featured a 100 foot tall tower with with circular discs illuminated by neon tubing.

First operated by Fox West Coast Theatres, it was later taken over by Mann Theatres who closed the State Theatre in December 1979. In October 1980 it was taken over by an independent operator and began screening Asian movies having been renamed Trieu Thanh Theatre.

Clarkus….. The “The Big Doom” is sort of common knowledge among the long time employees of Fox West Coast/National General Theatres. I was employed with them since age 15 til Mann bought out the entire chain of nationwide theatres. Within a year after he bought it he started closing or leasing out the majority of theatres. I was in the San Francisco area, where NGC had many theatres between SF and San Jose. By 1977-1978 he had closed every theatre or sold the property to developers. A chain of theatres that exceeded over 600 for many years was widdled down to less than 40 to present. He was not a showman, he was really just a real estate tycoon. After he messed up a wonderful chain of theatres he died. His wife Rhonda Flemming now holds on to the proceeds of the once wonderful company I and so many others once loved.

Ted Mann, must be related to Joe Cinnemette..

Clarkus,
Are you the Clarkus who was the resident artist for the “San Diego Free Press” and “Duck Power"
in San Diego in the late 1960s? I was one of the "Ducks” who printed “Duck Power.”
I accidentally discovered you name during a Google search. I have wanted to talk with you for years, but I have lost contact with almost all of the people from the commune.
If you are the same Clarkus, please contact me at : or
-Bob Mahoney

The State closed for awhile in December 1979, when the Mann chain declined to renew the lease due to low attendance. Building owners Marie Ogden and Peggy Lou Foster, daughters of the theater’s builder, sold it in June 1980 to a group of Italian investors, Alcer Incorporated, for $425,000.00

The State began showing Asian flicks around the same time as the Broadway Theater on 8th and Broadway downtown, in October 1980. The same Asian owner who took over the State Theater in late 1980, Thoat Tang Minh, also screened Asian fare at the Broadway.

The Mann chain took 976 theater seats with them when they pulled out of the State. It reopened as the Trieu Thanh Theater on October 4, 1980, under Minh (age 20!) and his partner Nguyen Huu Due, with around 1,000 patrons attending opening night, according to an article in the San Diego Reader dated 10-23-80. The duo also ran Asian cinemas in Anaheim, Santa Ana, Oakland, San Jose,and Sacramento.

Today, some of the State’s ornate sidewalk inlay remains, though it’s getting quite broken up. The lovely circular stand-alone ticket booth is long gone –

The grand opening ad has been posted here.

The STATE Theater tried to compete with “cheap weekend matinees” in the early 70’s… but it cost $1.50 at the State Theater, and only 75 cents at the Helix – so, unless there was some special movie I wanted to see, I would usually go to the Helix in La Mesa (and save my parents some money), which offered a better experience outside the theater to run around with other kids, while waiting for your parents to pick you up… at the State, you were basically the only kid there.