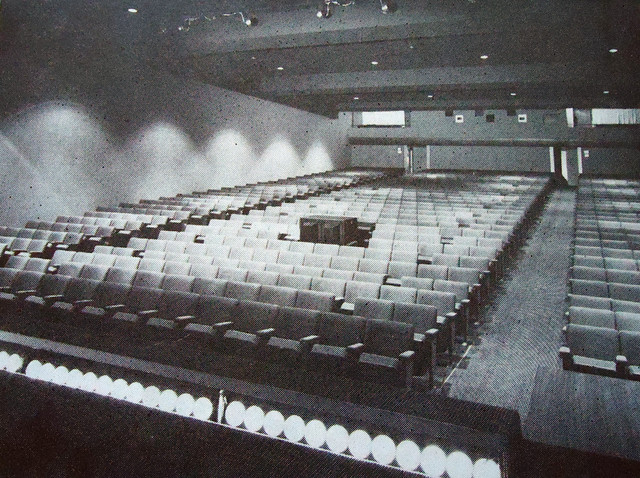 The L'Enfant Theatre opened November 14, 1968 (Benjamin Schlanger was the supervising architect) and closed in December 1969. It was leased by the American Film Institute from September 1970 for a short while. It then became a live theatre, known as the American Theatre which opened in May 1973. That closed in 1974 and it became a home for African-American play, a venture which also failed. It then reverted back to movies, screening Chinese and Japanese films and operated until 1988.

It is now the NTSB Conference Center.

The theater opened on 11/14/68. The following films were shown there in its brief run.

In the late 70’s it became part of the KB (or K-B) cinema chain. I had worked there as a sweep union projectionist (one that would fill in for projectionists on leave, sick or fired, etc.). This was a small theater.

The photo does not show the theatre. It was located on a street that passes under the Promenade(shown in the photo) and was next to a parking garage. That is largely responsible for the lack of attendance. No one could find it.

It was actually a nice theatre. I was a very frequent patron in 1971-72 when it was run by the American Film Institute. Shows would change daily and there were frequent series involving genres or stars. If the series focused on a particular star, that star would,more often than not, appear and participate in a discussion prior to the showing of the first film on the series.

One such series featured Ingrid Bergman and began with “Casablanca.” Ingrid Bergman appeared and discussed the film and her work/ Not unexpectedly, she was very gracious and witty. Quite a thrill.

I attended an opening stage act presented by Roberta Flack for singing artist Wayne Davis there in 1972. I never knew it was a movie theater.

I used to see Chinese movies there in the mid-1980s via the metro train Yellow Line. I would walk through a closed shopping mall to get to the theatre. It was a little eerie. Most of the patrons seemed to drive in from the suburbs. The movies were good.

The Green Line wasn’t built yet or I would have had another option. I always went on Sunday afternoons when the Promenade Shopping Mall was closed. Years later, when I saw Tsai Ming-liang’s “Goodbye Dragon, Inn” at the Freer Gallery of Art (also on a Sunday), the lonely wandering of those in the theatre for its last screening reminded me of my solitary walk through the promenade. Each step echoed with emptiness.

Someone else’s memories of seeing Chinese-language films. The Hong Kong films did dominate the line-up, though there were some films from China and Taiwan:

In 1988 I discovered the American Theatre (which despite its name, only showed Hong Kong movies) located deep underneath L’Enfant Plaza. For six dollars you got a HK double feature and enough trailers in-between to make you feel as if you’d seen about 8 movies that night. HK trailers are notoriously long and show you everything. Like a 4-minute condensed version of the whole movie. And they offered dried cuttlefish at the snack bar instead of popcorn. That was my Sunday evening ritual. Just me, and a whole new world of cinema to discover. Apparently my friends just didn’t “get it”. That’s okay. It was something I was happy to do alone. In fact the theater was nearly empty except for a bum or two who’d come in from the rain to get dry or sleep. There might be 2 or 3 Asian teens in attendance, but they would always sit in the back row in the dark.

My love for Hong Kong cinema grew with each Sunday. But by June, the American Theatre closed it’s doors for what they called “renovation”. But as I had feared, it was indeed a permanent closure.

David Huang operates the local Chinese channel broadcast on MHzTV and, in the 1980’s, operated the old American Theater (in the basement of L'Enfant Plaza as I recall) that featured Shaw Brothers and Golden Harvest releases, if anyone remembers. [More than a few remember.] And all these years later, I’m still trying to identify the gambling comedy featuring those 8-pointed throwing stars planted in the face of the gambler (could it have been Patrick Tse?) that I saw there.

This film might have attracted a more mainstream audience, a precursor to the subsequent film by Bernardo Bertolucci.

David Huang’s American Theater in L'Enfant Plaza offers Americans a rare look at Chinese cinema with The Last Emperor of China (Henry Pu Yi’s Latter Life). Directed by Lee Han Sheon and shot on location in China last year, the 93-minute production is said to contain certain messages that slipped past the Chinese censors. The film screens Friday at 6:30 and midnight; Saturday and Sunday at 1, 6:30 and midnight; and on Monday through Thursday at 7:45. Call 554-2111.