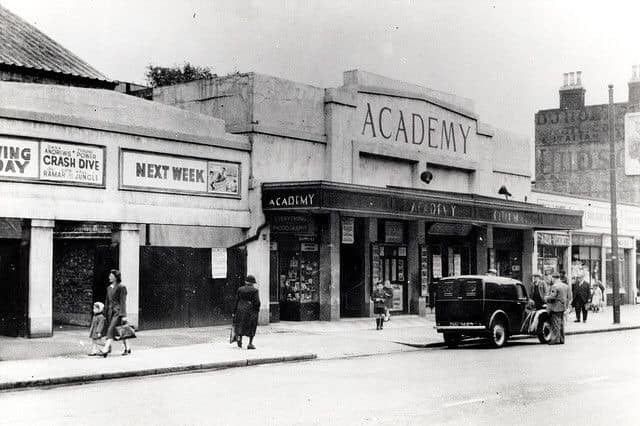 The Academy Cinema was located on High Road at Harrow Green, Leytonstone, a district in the north east of London. It opened on 29th March 1913 with "When Thieves Fall Out" and "The Drowning". Seating was provided for 650, all on one floor and the auditorium was set back from and ran parallel to the High Road. The cinema was operated by Scriven and Huxtable. It was closed on 26th August 1933 with George Arliss in "The Kings Vacation" and Paul Lucas in "Grand Slam".

It was enlarged and was given a new modern facade to the plans of architect F.C. Mitchell. The entrance was single storied and was flanked by shop units on each side. It re-opened as the New Academy Cinema with 1,100 seats on a stadium plan, with a raised section at the rear. The re-opening programme was Fredrick March in "The Sign of the Cross". The operator was now given as Harry Hymanson.

From 13th December 1954 it was taken over by Granada Theatres Ltd and was closed on 1st October 1955 for renovations by architect George Coles. Re-opening on 21st October 1955 as the Century Cinema with Marilyn Monroe in "The Seven Year Itch". In July 1957 it was taken over by Denman (London) Ltd. but continued to be operated by Granada Theatres Ltd. In November 1962 bingo sessions were being held on Thursday nights, and the Century Cinema closed on 5th January 1963 with Kenneth More in "We Joined the Navy" and William Lucas in "Touch of Death". It was converted into a full-time Granada Bingo Club which closed in March 1983.

The building was demolished and a block of flats known as Paramount House was built on the site, which is across the road from the Plough and Harrow pub.