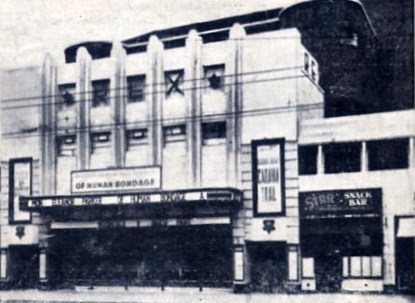 The Rex Cinema was a project of Associated British Cinemas(ABC) who used their in-house architect William R. Glen to design this large cinema located in the north east London suburb of Leytonstone. It was the first of the ABC cinemas chain to use the Rex name, most being usually named Regal or Savoy. It was located on the High Road Leytonstone at the corner of Kirkdale Road, across from the Elms pub, recently known as Lincolns and by 2017 The Birds.

It had an attractive facade in white faiance tiling, broken by six vertical columns, which had two sets of windows between each one. Inside the auditorium, the seating was arranged for 1,174 in the stalls and 780 in the circle. There was a decorative panel in the anti-proscenium side wall on each side which had a woodland tableau depicting deer in a forest.

The Rex Cinema opened on 21st September 1936 with Antoinette Cellier in "Ourselves Alone" and Wallace Beery in "A Message to Garcia".

The Rex Cinema led an uneventful life and was closed on 18th March 1961 with Laurence Harvey in "The Long and the Short and the Tall" and Sonya Wilde in "I Passed For White".

The interior was gutted with all decoration removed and it was converted into an ABC Tenpin Bowling alley. The bowling alley closed on 20th May 1972 and the building became derelict. It was later demolished and the site lay unused for several years until the current Co-Operative Funeral Care was built on the site.

A vintage photograph of the former Rex Cinema, converted into an ABC Bowling Alley in December 1961:
View link

The cinema closed in 1961! The Long and the Short and the Tall went on general release in North East London from March 12th 1961.