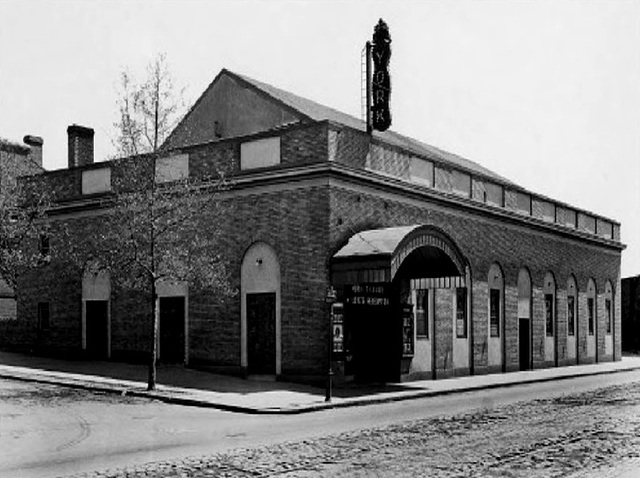 The York Theatre was opened on November 27, 1919 with Douglas McLean in “23 and a Half Hours Leave”. There were 1,000 seats, all on a single floor. It was equipped with an organ, which was opened by organist Raymond E. Rapp. Later operated by Warner Bros. Circuit Management, in early 1951 it was sold to District Theatres. It was closed in May 1954. In May 1957 it was sold to the National Evangelistic Center and has become a church.

The York Theater, eighth link in the chain of photoplay houses operated in the Capital by Harry M. Crandall, is now in course of construction on Georgia avenue, occupying the entire area between Princeton and Quebec streets. The newest of the Crandall theaters will have a seating capacity of 1,000 on one floor, no provision having been made for a balcony. The total floor area will be 10,000 square feet.
Entrance on Georgia Avenue

Entrance to the York will be from Georgia avenue into a foyer fifty feet long and twenty feet wide, with a ceiling height of twenty-five feet. The lobby walls will be of marble with inset, self-lighted poster panes. Lighting will be of the indirect, self-diffusing type.

The exterior of the theater will be golden brown brick laid in white mortar, with cornice, coping and clerestory walls trimmed in gold.
Silk Canopy Inside

The entrance will be surmounted by a marquee of wrought iron, copper and Tiffany glass, to harmonize with the color treatment of the building, which will extend to the curb line and be fitted with brilliant flood lights, bathing the entire front of the structure in bright light.

The decorative scheme utilized throughout the interior will be in silver, black and gold. One interior feature deserving mention is the treatment of the proscenium, which will be built in three arches under a silk canopy extending over the audience beyond the orchestra platform. The screen and side curtains, as well as the overhanging canopy, will be of gold silk, further beautified by concealed colored lighting making possible many extraordinary effects. There will also be elaborate balloon fixtures hanging from the ceiling.

Of special interests will be the ventilating and heating system specially designed for the theater. The unique feature of the new system will be that heat will be blown in from the ceiling. The same system will serve to introduce cooled air during hot weather and is capably of completely changing the atmosphere of the theater every thirty seconds.

Crandall’s York Theater was designed by, and is built under the personal supervision of Reginald E. Geare, who also planned and supervised construction of Crandall’s Metropolitan and Knickerbocker theaters.

The York will open about October 15, and will be devoted to exclusive showings of photoplays of the highest grade. The completion of the York will give Mr. Crandall three houses of the first rank in the northwest residential portion of Washington, the Knickerbocker and the Savoy being the other two.
Washington Post, Jun 1, 1919

Local619, do you have another link to the 1920 picture? The one you recently posted comes up “Page Not Found”.

There are some interior photos on this site:
http://tinyurl.com/llkl52