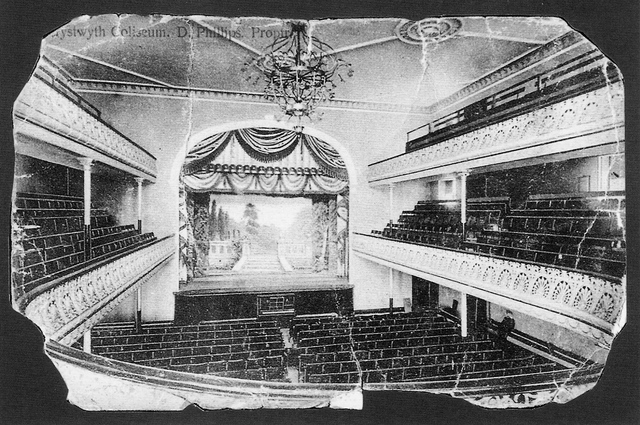 Opened on 9th June 1905 as Phillip’s Coliseum Theatre, it presented music hall acts, sketches and plays. The architect Arthur Jones created a three level theatre which has its main floor on the first floor of the building, entranced via a set of narrow stairs. There are shops at street level. The façade of the building is a lively collection of three bays of gables in the centre, containing windows and there are flanking bays on each side.

Upstairs in the auditorium, there are two horse-shoe balconies which had three rows of seats extending all the way down to the proscenium. Iron columns support the balconies. The stage was 14 feet deep and the proscenium was 24 feet wide.

By 1914 it had occasional film shows to support the live performances. In 1932 it was converted into a full time cinema, being re-named the Coliseum Cinema. It operated as an independent cinema throughout its entire life. In the 1950’s it was named Coliseum Super Cinema.

The Coliseum Cinema closed in May 1976. Some time later it was converted into its current use as the Ceredigion Museum and Art Gallery. All the original decorative features have been retained, making this a most unusual museum/art gallery space.

The former Coliseum Cinema is a Grade II Listed building.

As opened the theatre could seat 800 patrons. The proscenium was 27 feet wide, not 24, and its prices were 6d to 1/3d in the first year it went over to film only. Sound system was a British Acoustic sound system.Two dressing rooms were provided for the stage performers.
By 1951 seating had been reduced to 650 seats (reason not known) and its prices were 10d to 2/–.
In recent years it has gained the legend of having been haunted during its time as a cinema, although by whom is unknown. Balcony customers have reported being continually disturbed by someone wanting to get to a seat beyond where they were sitting or wishing to access the exit doors, but when they went to complain about this they found that they were the only person in the row!