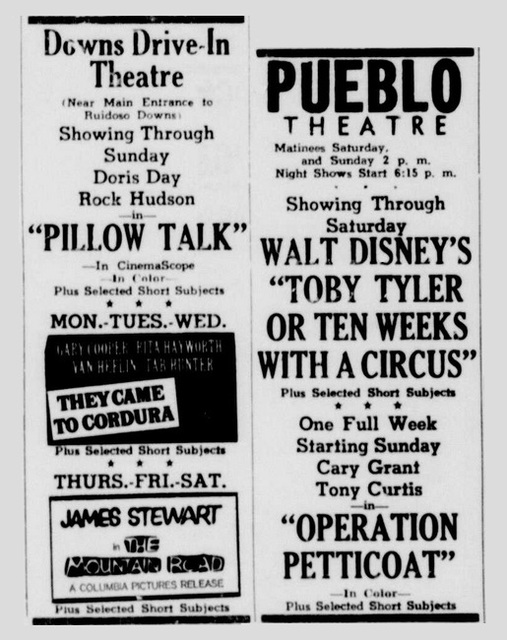 The Pueblo Theatre was opened in 1940. It was still open in 1959. Following closure (date unknown) it was converted into a book store.

A May 1957 coming attractions poster for the Pueblo in Ruidoso.

Isn’t there a racetrack in this town called Ruidoso Downs? I vaguely remember that name from my past days as a horseplayer.

The April 7, 1947 issue of Motion Picture Daily said that “E. J. Blaylock has sold the Apache and Pueblo Theatres in Ruidoso, N. M., to Theatre Enterprises, Inc.” An item in The Ruidoso News about the same time said that Mr. and Mrs. Jennings Blaylock had built the Pueblo in 1940. A small, blurry photo I was unable to capture digitally was just clear enough to reveal that the Pueblo was designed, not surprisingly, in the Pueblo Revival style.

The Pueblo was located on Sudderth Drive, and I’ve been unable to track down the exact address, but it might have been 2340. Some time after the theater closed the building became the home of the Aspen Tree Book Shop, where future actor Neil Patrick Harris was first employed when he was very young.

Ruidoso News, May 22, 1953: “The new owners of the Pueblo theatre in Ruidoso took over the reins of management early this week, relieving Bern Wilson, manager for Theatre Enterprise, Inc., Dallas, Tex., from whom the pair, R. B. Briggs of Breckenridge and J. C. Capps, Denver City, bought the entertainment spot early this month. Briggs … said the new owners plan considerable remodeling of the Pueblo.”