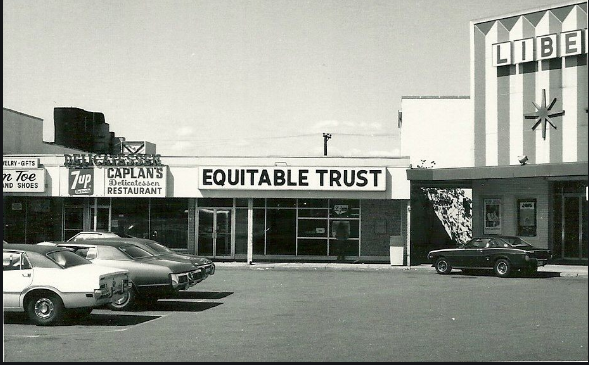 The Durkee Enterprises 900-seat Liberty Theatre was opened on October 29, 1964 in a space which had been a store as part of the Liberty Court Shopping Centre. It became the Liberty Twin Theatre I & II on August 25, 1971 when a second screen was added. In 1978 the original Liberty Theatre was gutted and completely remodeled. It was closed on March 26, 1987.

It was reopened by JF Theatres on August 3, 1989 with the two theatres converted into 4-screens, operating as Liberty Cinemas. On March 1, 1996 it was taken over by Premier Cinemas who operated this theatre in its final years as a discount house. The theatre did very well. Every Wednesday was free popcorn day when you brought your own bag. All seats were only $1.49 per person when the theatre closed on May 28, 1998.

Here is a rendering of the Liberty Theatre in Boxoffice, December 23, 1968. The caption said that a twin was being built for the 900-seat theater, and the project was to be completed sometime in the spring. Durkee Enterprises operated the house, which was located in the Liberty court shopping center. Boxoffice doesn’t make clear how long the existing single screen house had been in operation.

The Liberty had a nearby competitor, not yet listed at Cinema Treasures. Boxoffice of July 26, 1965, reported that Broumas Theatres had opened a house called the Plaza Theatre on July 14. It was located in the Liberty Plaza shopping center, which was right down the street from Liberty Court. The Plaza Theatre was renamed the Randallstown Theatre in 1973.

Uploaded a photo in which a portion of the Liberty can be seen.

The Liberty Court Shopping Center launched October 11, 1963 theatre-less by Food Fair Properties whose grocery store anchored the strip center here. It was Food Fair’s eighth shopping center. F.H. Durkee Circuit opened the Liberty Court Theatre in the strip on October 31, 1964. The $350,000 house seated 900 and was be followed by the Eastern Theatre project as suburban destination theaters were trending. The Liberty would shortly get competition across the street from the Randallstown-Plaza Threatre by the fledgling Broumas Cicrcuit that had opened less than year later in 1965. Meanwhile, the Eastpoint project was downgraded to the Eastern Center Hall that became an event center.

The Liberty Court was a success and, in 1968, Durkee designed a second theatre to compliment the original house now operating under the name of the Liberty Theatre. However, those plans did not transpire. The venue was eventually twinned becoming the Liberty Twin Theatre I & II on August 25, 1971. The theatre closed as the Liberty Twin at the end of a 20-year lease on March 26, 1987.

In June of 1989, it was announced that the theatre would reopen with the twin screens twinned. The resulting quadplex was a sub-run discount house known as the Liberty $1 Cinemas. J-F Theatres’ Jack Fruchtman, who had operated the Randallstown Plaza until selling his theatre Circuit in 1984, teamed with former Loew’s Theatre employee Tom Herman for the relaunch. It was renamed as Liberty Cinemas as prices moved from a buck to $1.50 then onward to $2.50.

On March 1, 1996, Premier took over the operation and restored order by lowering the price to $1.49 per show with free popcorn on Wednesday if you brought your own bag. (Refills were not permitted if the employees felt that the bag brought in was too large.) The “premier(e)” didn’t have to do with first-run movies but the circuit’s name and claim that the Liberty was Baltimore’s only four-star discount movie venue. (Pre-Yelp, it was a bit challenging to find out who rated it as a four-star establishment.)

Going under the name of Liberty’s Premier Discount Cinemas, the quadplex’s last showings advertised were on May 28, 1998 which would likely coincide with the end of a 10-year leasing agreement. If so, it closed with “The Wedding Singer,” “Hush,” “Mercury Rising” splitting with “Scream 2,” and “U.S. Marshalls” splitting with “Species 2.” If not, hope that people brought in clean bags for the free ‘corn

Dallasmovies, both you and Joe Vogel have mentioned a competitive theatre at Randallstown-Plaza. The theatre is not on CT nor can I find mention of it doing a series of basic Google searches.

robboehm: It’s the Randallstown Twin Cinema (aka Plaza and Randallstown-Plaza) and it went live today. Thanks for posting the photo!