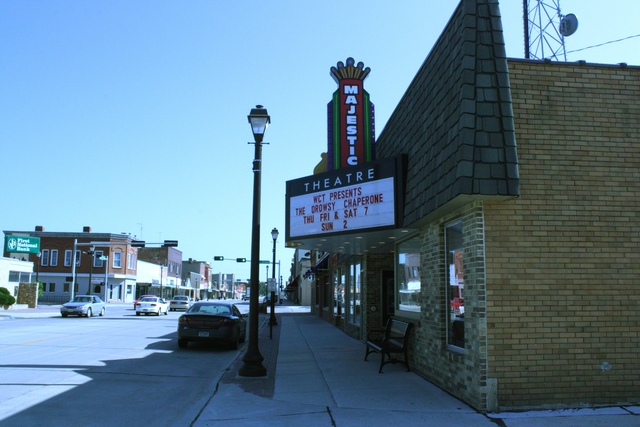 It was re-opened as a single screen non-profit theatre, renamed Majestic Theatre on December 10, 2010.

The Gay Theater is listed under Wayne NE in the 1942-43 Motion Picture Almanac. It and the Crystal Theater in Wayne were run by Marschoene Theatres Inc., Philip L. March, General Mgr. Marschoene Theatres was part of March Brothers Theatres Inc. of Vermillion, South Dakota. Chuck1231, I agree that as long as Cinema Treasures has the electonic capacity then the more theaters listed, the better. And when posters make mistakes, there is a proper way to post a correction without being insulting and nasty about it.

A “Twenty Years Ago” feature in Boxoffice of August 28, 1948, quoted a 1928 Movie Age item saying “E. E. Gailey, operator of the Crystal in Wayne, Neb., will open his new Gay Theatre there soon.”

The November 30, 1929, issue of Movie Age reported that “Western Electric sound equipment has been installed in the new Gay Theatre at Wayne, Neb.” E.E. Gailey is mentioned as the manager in this item.

The Gay was mentioned in Boxoffice of November 25, 1939, as one of six theaters then being operated by the March brothers. All were being remodeled and/or redecorated by Al Hauetter of the Modern Theatre Decorators company of Kansas City.

They were using the marquee to promote someone’s candidacy a few years ago:
http://tinyurl.com/yblmhl4

Good news: through the concentrated efforts of the town’s citizens, this theater is back in business! It is now been renamed the Majestic Theater, with a new marquee and the addition of a vertical sign, has been returned to its original single screen status, has 3D capability, and has a rebuilt stage to accommodate live performances. Here is the story: View link

Kudos to the citzens of Wayne NE.for repoening the Majestic. you must be a great group of people.

That is good news,good luck to them.

Good for you! May other towns and cities follow your excellent example. Best of luck!

I just interviewed Melanie Loggins, who acts as general manager, of The Majestic for a documentary about independent theaters I’m currently working on. The Majestic is a beautiful little theater, and completely embodies the character and passion of all those who are involved with it.

Elmer E. Gailey opened the Gay Theatre on September 30, 1928 with Clara Bow in “The Fleet’s In” and live vaudeville acts. The theatre seated 545 people at opening and 1,700 were admitted to the three opening day events with 500 more turned away. The theatre sported a Spanish themed architectural style with a cry room for parents with babies who wanted to attend the show without disturbing others.

On April 7, 1932, Phillip March of March Theatre Circuit was one of three business persons who bought the Crystal and Gay Theatres. Wayne remained a two-theatre town for just over ten years until March shuttered the Crystal in 1939.

In 1992, the March Brothers twinned the theatre and renamed it the March Twin Theatre. It closed not long after its 80th Anniversary in April of 2009. The theatre was refurbished and would open as a 501© (3) non-profit relaunching on December 10, 2010 as the Majestic Theatre. The theatre continued with a legion of volunteers and community spirit into the 2020s.