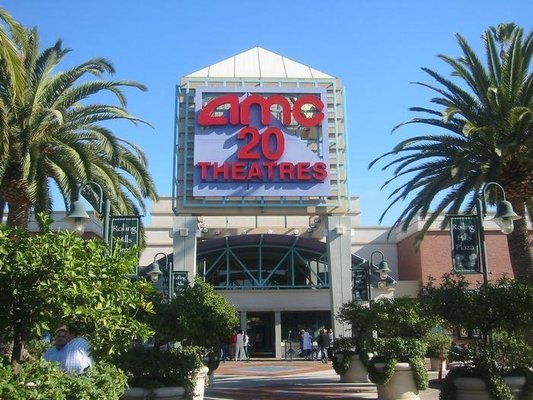 The AMC Rolling Hills 20 started out originally as the AMC Rolling Hills 6. It was your typical early 80’s 6plex, mirrored in design to the AMC Marina Pacifica 6 amongst others. The theatre was always busy and expansion was needed. In the mid 90’s, it was determined that the theatre would be added on, and expanded to a 20 plex. A new 13 plex was added next to the old 6 plex (which stayed open, sans one doorway out) while the 6 plex stayed opened. AMC then opened the new 13 plex with stadium seating, and all theatres under 300 seats.

With the new theatre, the old 6 plex was semi gutted. The old 6 screens were rebuilt with stadium seating, and a 7th theatre was added where the former lobby was. The concession stand there was remodeled to form a very small satellite stand, and the restrooms were kept in the old lobby area, just long corridors led to them. Its definitely neat to see a movie in the old lobby!

uh, that’s a picture of BevMo. the theater IS behind it, but…

That is actually a picture of the former Rolling Hills Theater which has a separate entry. As mentioned above by twintermute, the 20day plex is behind this former theater.

This opened on May 16th, 1986 with six screens. Its grand opening ad can be found in the photo section.