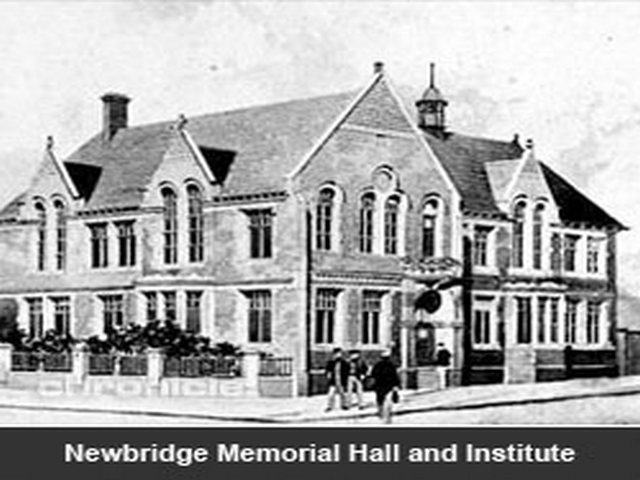 Located in Newbridge, northwest of Newport, Monmouthshire (now Gwent), it was listed as being in England until boundry changes came about and it is now definately in Wales.

The Newbridge Institute was opened in August 1908 and was designed by architect R.L. Roberts. An additional hall was built beside it at its rear right-hand side, the Memorial Hall or The Celynen Collieries Workmen’s Institute & Memorial Hall (to give it its full name) was opened in 1924 with Douglas Fairbanks in "The Thief of Bagdad", and was designed by E.D.T. Jenkins. It is listed as operating as a cinema, known as the Memorial Hall, in the Kinematograph Yearbook 1937 edition. The Memorial Hall cinema was located upstairs on the first floor of the building. Seating was provided for 1,000 in stalls and circle levels. The interior has much decorative detail in a mix of Art Nouveau, Art Deco and Neo-Classical styles. The proscenium was 27 feet wide and there was a large stage 19 feet deep and four dressing rooms. Films and occasional revues were the programming. It also had a dance hall located on the ground floor of the building.

By 1944 the seating capacity had been reduced to 808. After going over to part-time bingo club use in the 1960’s the Memorial Hall was closed in around 1972 with Yul Brynner in "The King and I". The building was unused and lay empty for over 30 years.

It was used as a location for the film "House" (1998), set in a declining bingo hall, and for the film "Very Annie Mary" (1999). In 2004 it came to the public attention when it was featured in the BBC TV programme ‘Restoration’. Currently undergoing restoration while in use as a community centre, the restoration is due to be completed by 2009. The seating from the stalls level is currently piled up in the circle, and the projectors still remain in situ in the projection box awaiting restoration.

The Memorial Hall was designated a Grade II Listed building in 2003.

The Memo was reopened in November 2014, gloriously restored. Photo from May 2017

As detailed in the text the theatre and ballroom were contained in a separate later building largely behind the black & white (Chronicle) photo, as can be seen in this May 2017 photo:–