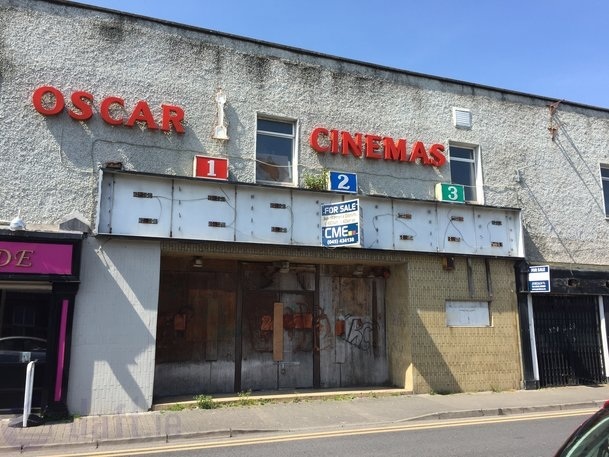 The Newbridge Picture Palace opened before 1937. It is listed in that year’s edition of Kinematograph Yearbook with a seating capacity of 500. Occasional variety shows were held on the stage and it had two dressing rooms. The proscenium was 20 feet wide.

In around 1947 it had been re-named Palace Cinema. In 1971 it was re-modeled into a triple screen cinema and re-named Oscar Cinemas.

The Oscar Cinemas closed on 12th January 2006. A six-screen cinema was in the planning stage for the Whitewater shopping centre, but this never happened.

The Oscar reopened in October 1973 with admission prices advertised at 40p. More info here: http://www.kildare.ie/library/ehistory/2013/01/new_oscar_provides_newbridge_w.asp. One source states the 3 screens did not arrive until 1990. When it closed in 2006 the last films to show were King Kong, The Chronicles of Narnia and Just Like Heaven. Michael Roycroft had made the decision some time previously in anticipation of the new cinema opening at the Whitewater Shopping Centre. Films are also shown at the Riverdale Arts Centre in Main Street once a week.

The multiplex in the Whitewater Shopping Centre eventually opened but the operator has not supplied an opening date.