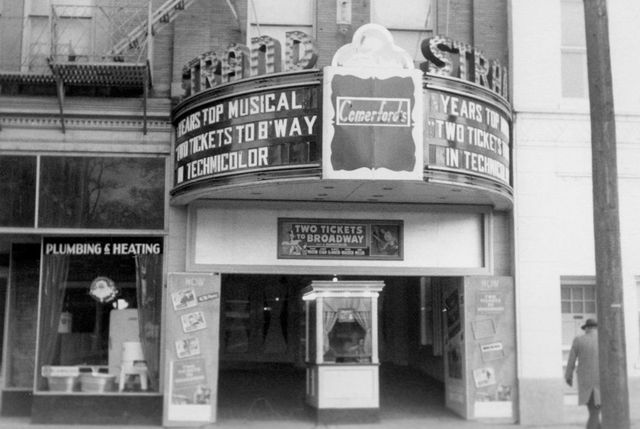 The Carlisle Opera House was opened on September 1, 1898 with a performance of John Phillip Sousa’s comic operetta “El Capitan”. Films were first screened in 1908 and the building was redesigned. On February 23, 1925 following a remodel it reopened as the Strand Theatre. It was closed in 1959 and the auditorium was demolished. The front section of the building was converted into apartments which were destroyed by an arson fire on August 29, 1972 when two people were killed.

This theater was operated by Comerford-Publix Theaters, and was still operating as of 1955. Presumably it closed not long after that, as friends who grew up in Carlisle have no memory of it. The population of Carlisle at that time was around 14000, and perhaps having two theaters in town, each with seating over 1000, was too much for the market to bear, given the new popularity of “free” TV. I don’t recall any empty theater being destroyed by fire in August 1972, but that was a busy summer, what with Tropical Storm Agnes and all, and perhaps the building had been converted to some other use.

Bryan: Thanks for that link. As it was still referred to as the Strand Theater, at least part of it must have still existed at that time, though I’m sure it was not in business. By the address it would seem to have been a large building, probably with storefronts and apartments. The fire was arson, and tragically two people were killed. I wonder if the theater itself was still sitting there decaying, an open invitation for vandalism. I checked with the Carlisle Sentinel and their archives have all been transferred to the Cumberland County Historical Society, which is only three doors down from where the Strand once stood. If and when I have a chance to go there I’ll check it out.

The woman who was convicted in Jan 1973 of setting the fire that destroyed the vacant Strand Theatre in August 1972 killing two people has been granted a new trial on the basis of scientific advances in the detection of fire origins.

Note there is picture of the Strand as Photo #2 of the array in the attached article.

This location opened as the Carlisle Opera House in 1898. Movies were first shown there in 1908 and became so popular that the interior was redesigned to better project films. In February of 1925, it rebranded as the remodeled Strand Theatre which operated until 1959. In 1961, the auditorium of the theatre was demolished. The rest of the building was transformed into the Strand Theatre Building apartments which was lost to arson, as noted above, on August 29, 1972. The building’s remains were razed soon thereafter.