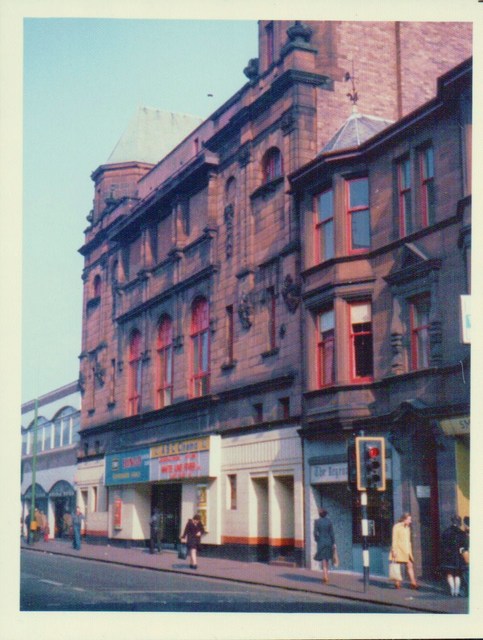 Built and opened as a live theatre, the King’s Theatre opened on 1st October 1904. It was designed in an Edwardian Baroque style by Glasgow architect Alexander Cullen. There is a finely detailed facade containing palisters and columns in red sandstone. Inside the auditorium, the seating capacity was provided for 1,268. After operating for four years, the company was put into liquidation and the theatre was closed for six months until new owners came along. In 1913, Bioscope shows began to be shown in the building and in 1920 it was sold to Scottish Cinemas and Variety Theatres, who later became part of Associated British Cinemas(ABC).

It closed on 14th April 1934 to be altered internally to the plans of architect Charles J. McNair of Airdrie. It re-opened as the Regal Cinema on 17th December 1934, now with 1,834 seats.

Re-named ABC in December 1964, it closed on 12th May 1973 when the auditorium was twinned. The former circle becoming a 602 seat cinema and a bingo club operating in the former stalls which opened on 17th September 1973. Closed on 1st June 1975 by a fire, it re-opened as a three screen cinema on 18th August 1975, with the former circle as before, and two screens in the former bingo area (stalls) with seating for 193 & 149.

Later re-named Cannon, it became the MGM briefly, before a management buyout brought back the ABC name again. The ABC was closed in 1999 and has stood empty and unused since then.

A vintage photograph of the ABC in March 1965, playing the ABC release:
View link