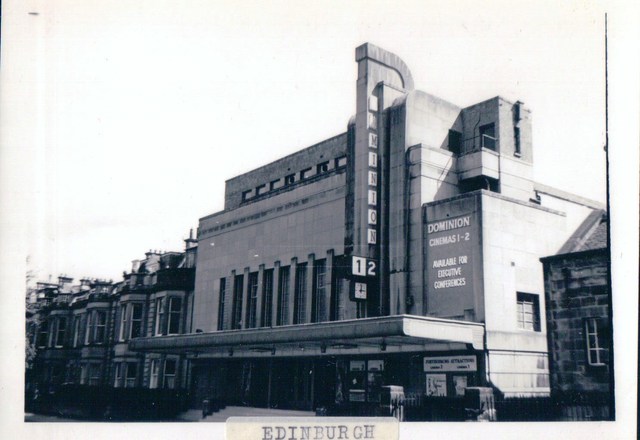 Located south of the city centre of Edinburgh in the district of Morningside. The Dominion Cinema opened on 31st January 1938 with Shirley Temple in “Wee Willie Winkie”. It was designed in an Art Moderne style, by Edinburgh architect T. Bowhill Gibson. There is a tower located to the right of the building’s facade, with windows occupying the central section over the entrance. Inside the auditorium seating was provided for 1,375 in stalls and circle levels. Lighting was via concealed lights in ceiling coves. There are decorative Moderne style features on the splay walls beside the proscenium, which was 36 feet wide. The cinema was equipped with a restaurant for the convenience of patrons.

The Dominion was closed for twinning in 1972 and re-opened on 25th May 1972 with 584 seats in the former stalls and 296 in the former circle, which had been extended forward over the front stalls area. Film star Moira Shearer declared the Dominion re-opened and the films were "Cold Turkey" and "On a Clear Day You Can See Forever". In 1980 a third screen seating 50, was added in some spare space at the top of the building. Initially this used a video projection system. In late 1998 a fourth screen was added with a seating capacity of 60, which was in the former restaurant area.

The four-screen Dominion Cinema continues today as the only independent suburban cinema in Edinburgh. The cinema has been re-seated with luxurious leather recliners and is equipped with Dolby DTS and SR Sound systems.

The seating capacities are much reduced from the figures above (and I think the 1972 capacities are the wring way around – the smaller cinema was the rear stalls one). The Dominion is still going strong in 2011 as the photos below show.

We lived in nearby Merchiston, Loved the Dominion and attended regularly.. they also served the ‘Domburger ’ in the foyer as I recall..