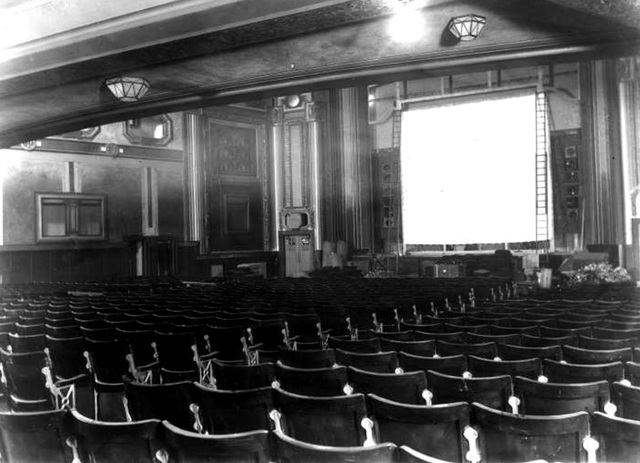 Built in 1922, the Caley Picture House opened on 1st January 1923 with "Game of Life". Designed in a Beaux-Arts style by architects' J.S. Richardson & J.R. McKay. The original seating capacity inside the auditorium was provided for 900.

In 1928 the size of the building was increased to the designs of architect James McKissack of the John McKissack & Sons architectural firm. He designed the splendid new entrance to the right of the building which contains a beautiful staned glass window, also the wing parallel to the road with shop units and the Art Deco treatment of the auditorium, which had its seating capacity increased to 1,900. The proscenium was 50 feet wide and was elaborately decorated.

Because of its wide proscenium, the Caley Picture House was well suited to be the first in the city to be equipped with CinemaScope. The first film in this process; Richard Burton in "The Robe", opened here in February 1954 for a season.

In 1983, the Caley Picture House was sold and it closed in 1984. It was converted into a discotheque in 1986, operating as Century 2000 and Revolution. This later closed and the building stood empty and unused for several years until it was renovated by the MAMA Group and re-opened as a concert venue; ‘The Picture House’ in September 2008 and was quckly re-named HMV Picture House. In 2014 it was taken over by the JD Wetherspoon chain of pubs and converted into one of their bars which opened on 13th December 2016.

The Caley Picture House can be seen in this vintage 1959 photograph; It’s the dark building jutting out, mid-distance on the right, just beyond the bus:
http://flickr.com/photos/allybeag/838615722/

The Caley re-opens this month as a live music venue and club called The Picture House, run by the MAMA Group. The gaudy pink interior scheme and intrusive bars appear to have been removed for this more sympathetic use.

Shortly after opening as a live music venue in September 2008, it was renamed the HMV Picture House, following a new sponsorship deal.

The Picture House (Caley) is in good condition and functions as a 1,500 capacity live music venue. This is mainly standing, but the front five rows of the balcony are padded bench seating. Photos from October 2011 below.

Now being converted into a Wheatherspoons pub

Wetherspoon News has a feature on the Caley in their spring edition.

The Caley Picture House pub opened in the former cinema on 13 December 2016.

I visited on Friday 23rd June 2017. This is another superb Wetherspoon conversion.