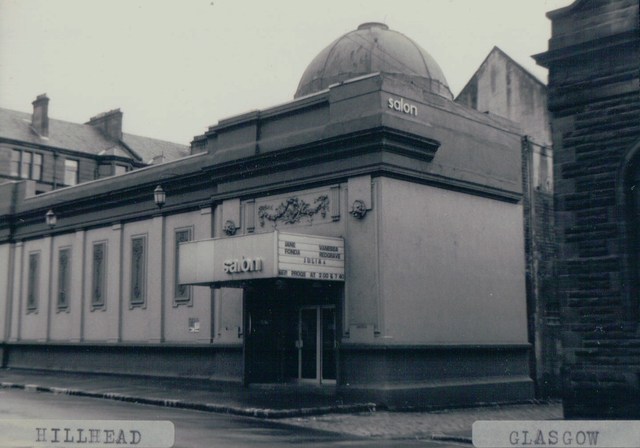 The Hillhead Picture Salon was one of the first suburban cinemas in Glasgow. It is located in the West End of the city. Opened on 4th October 1913 with a seating capacity of 763, it was designed by the architectural firm Brand & Lithgow. It is a long low building which has a dome over the entrance. Seating was provided is stalls and a small circle. The auditorium has a deeply coffered ceiling, with moulded plaster garland decorations on the walls.

In 1931 it was re-furbished to the plans of architect James McKissack and the seating capacity was reduced to 600. It was an independently operated local cinema and was very popular in the area.

In April 1969 it was sold to the Fyfe & Fyfe entertainment company and was refurbished. Caledonian Associated Cinemas(CAC) took over in 1987 and they operated it until its sudden closure on 12th October 1992. Local protests and petitions were organised to have the Salon Cinema re-opened, but these came to nothing. After laying empty for a while, it was converted into a restaurant, known as Littlejohn’s. On 6th October 2001, it re-opened as the Gong bar/restaurant. It was refurbished in 2007 and re-named ‘The Salon’ and screens films occasionally.

On 22nd March 1977, Historic Scotland designated the Salon Cinema a Grade B Listed building. This was up-graded to Grade A Listed in June 2008.

The conversion to Littlejohn’s restaurant was largely sympathetic, with the stalls rake terraced over, the balcony boarded off for toilets and offices, and film projected onto the original screen with a video projector.

The conversion to Gong was an appalling infliction, completely hiding most of the original interior under false panelling.

In 2007, it was refurbished, and the opportunity was taken to remove much of this panelling, once again uncovering the fantastic ceiling ribs and plasterwork, and sidewall decoration. The modern glass canopy was replaced with a replica Edwardian one, although the Littlejohn’s version was perhaps more convincing. Sadly, new mezzanine wings were built along the sides of the auditorium, but these are glass-fronted and not completely ruinous. The original application proposed puncturing the unique Hennebique ferroconcrete ceiling for skylights, but this was thankfully dropped. In fact, the cinema made extensive use of Hennebique ferroconcrete, presumably for fireproofing reasons – the balcony, roof with its exposed structural ribs and the projection box at the rear stalls under the balcony all made use of this process.

As of Spring 2008, there are film shows projected digitally onto the former screen area during some evenings.

Forgot to add, the 2007 conversion also saw the venue renamed The Salon.

Now named The Hillhead Bookclub, the venue continues as a bar with a slightly quirky theme, reflecting the bohemian student neighbourhood in which it lies. The decoration has been altered to that of shabby industrial chic, and the false window in the former screen area has been removed, exposing the bare wall face beneath. Nonetheless, most of the decorated plasterwork on the ceiling is still visible.