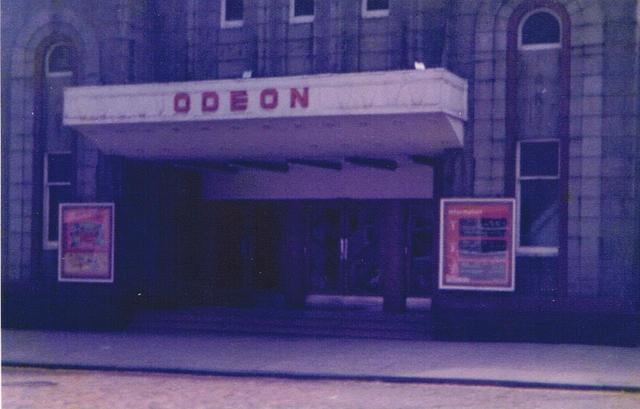 Built by Poole’s Theatres chain, the Regent Cinema opened on 27th February 1932 with 2,000 seats. From June 1936 it was taken over by County Cinemas, who were themselves taken over by the Oscar Deutsch chain of Odeon Theatres Ltd. in September 1939. It was re-named Odeon on 29th July 1940.

Aberdeen architect Thomas Scott Sutherland designed the Regent Cinema, which has a striking façade of glazed granite blocks that are stepped in a Baroque style. Seating in the auditorium was provided in stalls and circle levels. The proscenium was 30 feet wide and in the early days occasional variety shows were staged, as well as film presentations. There was also a café provided for the use of patrons.

In 1947 the seating capacity had been reduced to 1,865; 1,433 in the stalls and 432 in the circle. In April 1974 it was converted into a triple-screen operation with 793 seats in the circle and former front stalls areas and two 123 seat mini-cinemas located in the former rear stalls under the circle. In 1991 two additional screens were added in the former front stalls area which each seated 219.

The Odeon was re-furbished in 1995 and was closed on 13th June 2001. The auditorium was gutted, the circle removed, as was the stage and it was converted into a Wellmans Health Studio which opened in August 2002.

A vintage photograph of the Odeon, playing the Rank release in May 1971:
View link

The Odeon Aberdeen closed for two weeks from May 25th 1959 for the installation of Todd-AO 70mm screen and projection. On June 8th 1959 South Pacific opened for a 16 week run.

The club has been Nuffield Health since at least 2013 and includes a 20m swimming pool.

I can recall a chap named Colin Morrice who worked at the Odeon Aberdeen, anyone remember him…

Was he the fair-haired projectionist who worked with Bill Cowie (former head projectionist at the Gaumont) and Tony Laing (from the ABC Regal?) during the 1970s/80s. Not tall, very nice guy, married one of the Odeon manageresses. Afraid I have lost track of him. Maybe another contributor will respond? Jim

Hi Jim, I meet up with Colin on the 2 nd Tues of the month for a coffee and a blether. And also meet Raymond Hulse (ex ABC Cinema).