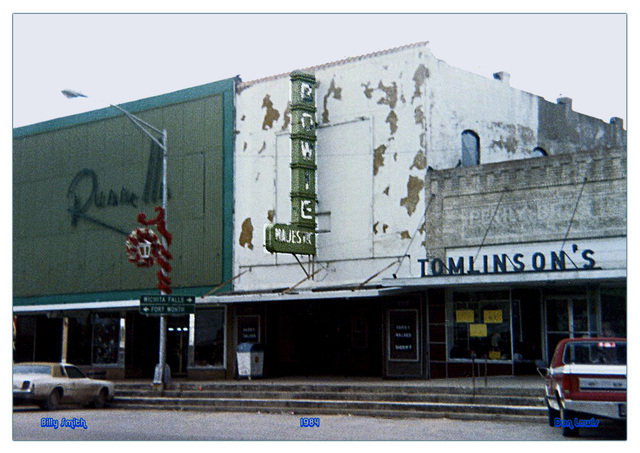 The Majestic Theater was operating prior to 1941. In late-1984, the closed Majestic Theater had large pieces of paint peeling off the building, but otherwise seemed to be in good shape. There was no marquee, but an overhang sheltered a recessed entrance and outside ticket box. Movie poster frames were also visible on either side of the entrance. There was a large vertical green sign with white letters spelling out “Bowie” and small lettering under that spelling out “Majestic”.

I have many great memories of all the movies I saw at the Bowie Majestic between 1962 and 1968. I think tickets were 25 cents at first and went to 50 cents, probably when the seating was changed and the balcony disappeared. Originally there were three sections of seats but the aisles were changed to each side and there was only one large section of seats. I have little memory of the balcony. A classmate, Earl Collins, was the projectionist and a few times I joined him in the booth. I did the changeover a time or two and I saw him doing the splicing and rewinding and everything. He would have the arc carbons timed perfectly and then have to readjust the movements after another projectionist filled in and changed them. Earl showed me the way the two projectors were coupled for two-strip 3-D movies. During the time he worked there he received one magnetic striped print, The Blue Max and he ran it through the stereo system but it didn’t sound right or didn’t work properly. I enjoyed looking at the anamorphic lenses and noticed that the sets at the drive-in and downtown were different types. I believe one set had an adjustment for the amount of anamorphic correction. Also, the Majestic used a DC generator for the arc but the drive-in used rectifiers. Earl told me that he could tell from trailers which advertised movies were scope because the trailers were “letterboxed”. I think he never had actual scope trailers. If a movie was scope and the cartoon wasn’t, the cartoon was projected with the scope lens anyway. I remember that Earl also said that Techniscope movies tended to lose frame for some reason, as if printed with frame errors. The entrance to the projection booth was behind the poster on the left/south side of the building. The ticket booth had usual dual clocks with Time Now and Time Out. I didn’t know about surround sound or the surround channel in those days and I always wondered about the speakers on the walls of the auditorium. I don’t know if there were any on the rear wall. There were three movies a week for years. I used to have a Zotz plastic coin but I don’t remember any other tokens from other movies and never any 3-D presentations either anaglyph or polarized. I wasn’t familiar with Technicolor dye imbibition printing back then so I wouldn’t have looked for the distinction but I remember the reissue of Darby O'Gill and the Little People had great color, especially the Banshee. I wish I had all the monthly calendars with the Majestic and Trail schedules. I always wondered how they could plan a month or more in advance when a movie’s first run could vary.

From 1984 a photo of the Majestic Theater in Bowie.