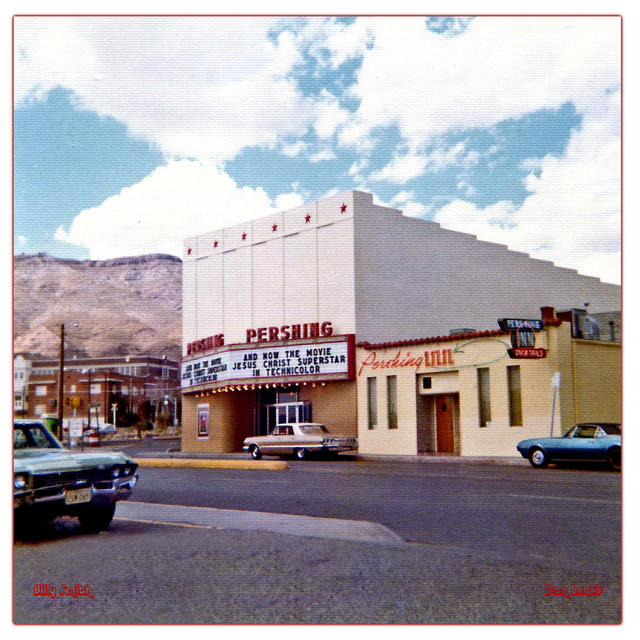 The Pershing Theater was housed in a neat clean corner building at the base of some desert foothills in El Paso. It opened March 28, 1940. At the top of the building across front were six red stars. A nice red trimmed marquee sheltered the entrance and “Pershing” was spelled out on both sides of it in red lettering. It was closed in 1988.

The Pershing Theatre is in an area of El Paso called 5 Points where Avenues and Streets intersect. I was a regular at this movie house as well. However, I didn’t start going ‘til I was in my early teens. Way after they shut and torn down The Capri. We would train-hop from downtown El Paso all the way to The Pershing in 5 Points. The last movie I remember seeing there was Berry Gordy’s The Last Dragon. Shortly after that they shut it down, but it stayed intact. Last I heard was a couple from New York bought it and restored it and also live in it. Very cool. I wish I could do that to The Capri.

Cool pic, Lost. Matter of fact, it still looks like that. Last time I was back home, it was looking exactly like that pic. It was a cool little movie house. However, not as cool as The Capri.

I worked at the Pershing in 1952 as an usher and occasional doorman. The thing I most remembered was having to change the Marquee. I usually got off at 10 PM, but I was expected to wait until 9:30 to start the marquee and they did not pay overtime. I had get a long wooden step-ladder from the back of the theatre outside fire entrance and carry it to the front. The ladder had to be set up in the street because when they widened Pershing Dr. a few years previous, the street curb was extended toward the theatre. The marquee was not changed and was left extended over the street. Had a couple of close calls, but nobody ever hit me. Wind did blow the ladder over a few timtimes though.
ladder had to

The current owners added an addition to the westside of the theatre where the parking lot use to be. It has a garage. Before they built that addition, the west wall had a really nice mural of Jerry Garcia and Jimmi Hendrix. The mural was there as late as 1994.

I was raised just three blocks west of the Pershing Theater. Our house was (and still is)located at 2631 Pershing Drive (corner of Pershing and Maple streets.) We used to go and watch the Saturday Matinee which included serials such as Batman and Robin, The Green Hornet and westerns with Gene Autry, Hopalong Cassidy,etc.

It was so cool inside the theater during the summer season that we watched double features two or three times.

A friend of ours that we graduated with at Cathedral High School worked there as an usher. His name was John Doran who I haven’t seen since we graduated in 1961.
We have some great memories of this theater and the Pershing Inn, which is a local tavern located right next door to the theater.

Anyone remember this theater having a piano pit and someone playing piano before the movie coming up from the floor?

Worked at this theatre briefly in the late 1980’s when Bob Hartgrove “ran” it. The seats were all cut up and they didn’t allow patrons in the balcony. I had to change the marquee once, and as the gentleman above states, you had to put the ladder in the street – very interesting with all the traffic. Oh, and the staff was stealing Bob blind, but then he “inspired” that in people.

This opened on March 28th, 1941 Grand opening ad in the photo section. 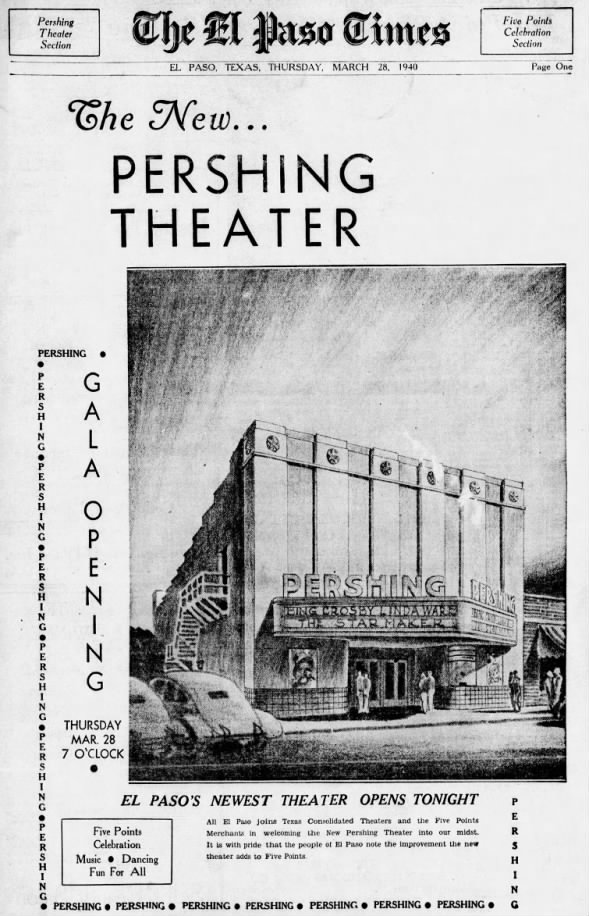 As early as 1921, there was talk among the businessmen of the growing Five Points area about the need for a movie theater, “but only a high-class house, showing the best of first-run pictures would pay, it was pointed out, as people would rather drive downtown than see poor pictures.”

Nineteen years later, on March 28, 1940, the Pershing opened in the heart of Five Points. A large supplement to the El Paso Times featured numerous display ads by local merchants welcoming the theater to the neighborhood. These included all those you might expect from the area, but also a notable ad taken out by C.C. Dues and W.H.M. Watson of the Crawford Theater across from San Jacinto Plaza. They wished manager Will Winch “a pleasant history and a bright future.” But they also took the opportunity to mention that their theater would be showing Nancy Drew and the Hidden Staircase and Legion of Lost Fliers.

The theater was designed by a couple of Dallas architects at a cost of $75,000. One of the Pershing’s major features was the marquee, which was made of porcelain enamel, featured 300 flashing lights and was called “the last word in this field.” It had terraza stone in the floor of the lobby and thickly padded carpets in the aisles and the stairway to the balcony. The theater accommodated 450 downstairs and another 250 in the balcony and had a parking lot for 68 cars.

Over the next four decades, the Pershing became known as El Paso’s family theater. All of Disney’s films premiered there.

But by the 1980s, the Pershing had seen better days. The Pershing was the last single-screen high-class movie theater built in El Paso before the rise of the malls and their multi-screen theaters forever changed the business.

In 1984, a church called La Puerta Gospel Church asked the city plan commission about holding services in the theater. But a city ordinance prevented bars and churches from being too close to one another. That’s the Pershing Inn right next door, which has been there since 1949. And just down the street are Lupe’s and the Italian Kitchen, which both serve liquor. The request was denied.

On June 8, 1986, the Pershing closed after 46 years with a showing of Disney’s Sleeping Beauty. It reopened later that year as a second-run theater, then became a dollar theater in 1988.

In January 1989, photographer Marty Snortum bought the building. After extensive work, he made office space available to graphic designers, a filmmaker and other artists.