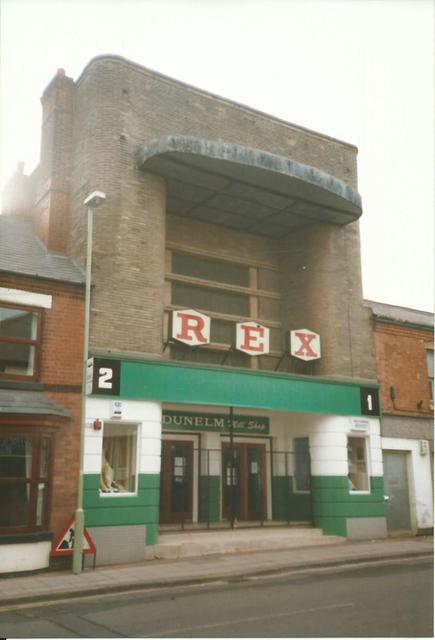 An astonishing Moderne style façade to find in a small town, originally surmounted by a neon-lit semi-sky sign. Inside the two-level auditorium, the main feature is the highly-ribbed ante-proscenium, covered in silver plastic paint and up-lit from the balcony parapet. The tabs were up-lit from the false orchestra pit. A Holophane motorised Auto-Selective controller ran the colour changes. Projectors were Ernemann, sound Zeiss-Ikon. Like its sister the Regal Cinema, almost next door, there were double seats in the balcony.

The Rex Cinema opened on 2nd February 1938 with Errol Flynn in “Charge of the Light Brigade”. Like the Regal Cinema, it was operated by the Deeming family. It was converted into a twin cinema in May 1973.

The Rex Cinema closed on 3rd May 1984. It went over to retail use as a store for the textile company Dunelm Mill, which closed on 26th June, 2016.

Dunelm Mill has ceased trading in the former Rex, it is currently boarded up and unused.