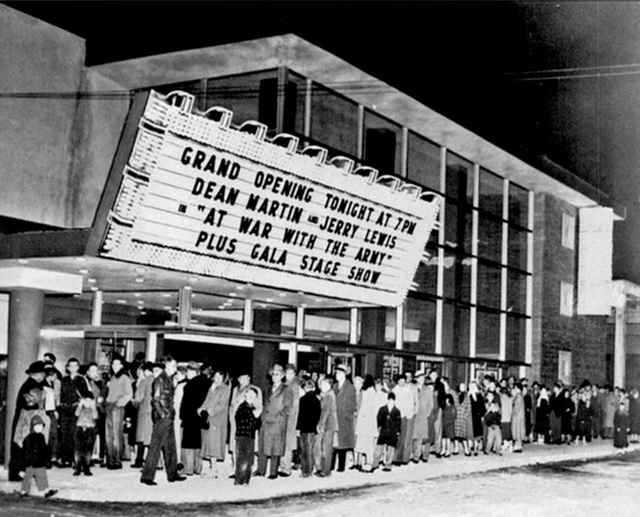 The Allen Theater was built as part of a shopping center at East-West Highway and New Hampshire Avenue in Takoma Park, Maryland. Takoma Park is northeast of Washington, DC.

The Allen Theater opened March 24, 1951, with a stage show, an orchestra, and the movie "At War With the Army" starring Dean Martin and Jerry Lewis. James Hogan and Francis Groff were the architects. Due to county regulations, the vibrant neon of the vertical sign could not be turned on! The exterior had glass from sidewalk to the roof, and red brick.

After Sidney Lust operated the theater for many years, in 1975 Paul Sanchez began operating it. In 1985, the Allen Theater was twinned. New movie operators took over in 1989. It closed in 1990, and was converted into retail stores. On December 4, 2009, a fire destroyed the former theater which was being used as a shoe and clothing store.

An additional article with pictures about the theater, its history, and the fire: View link

I have fond childhood memories of the Allen Theater because my grandmother, Catherine Casey, worked at the candy counter there. Being an employee, she was able to get my 4 sisters and I into the Sunday matinees for free. This was a really big deal to us and made us feel very privileged. We saw movies like Dr. Doolittle, Chitty Chitty Bang Bang, Andromeda Strain, etc. I remember running in the dark from my seat to the back of the theater where the candy counter was to get Good n' Plentys or Junior Mints from grandma. I also remember the comedy/tragedy mask designs in the lobby and on either side of the big screen. One time in the early 70’s my parents were there seeing a movie at night without us kids when a robbery occurred as the movie was playing and suddenly the burglar ran down the aisle toward the screen and dashed out one of the exit doors. I can recall my parents talking about it the next morning with great excitement.

I drove by the theater earlier in the day and sat across the street from it, where there is a Dunkin Donuts, bought some food and just took all in that destruction that is there now. Not to say that this theater was any kind of palatial jewel, it does have memories for me and many others. As the pictures show, pretty much all that is left is rubble on the inside and, the framework that was the lobby and marquee and a red brick wall to the rear.

On what was left of the front facade is a poster for the New Hampshire redevelopment project, which seems to take on the look of nearby Hyattsville, MD and its redevelopment efforts of row and apartment homes, small businesses and the like.

I remember as child going to see the chuck Norris movie GOOD GUYS WEAR BLACK at the Allen.

My first job got a free ticket for Saturday afternoon double feature tickets, I carried a few hundred flyers to J Enos Ray office on Wednesday afternoon,and then office seperated them to each class. Each Flyer has a lucky number. I lived on Eastern Ave and on a clear night the sign was visible. Dairy Queen was blockaway with soft serve.

I had three local theatres growing up in Northwest Park: the Langley, the Flower, and the Allen. The Langley was on the mainstream firstrun track, the Flower was what passed for an art house, but the Allen was fearless in running exploitation movies. I spent many a happy Saturday matinee in the Allen sticking to the floor while watching Roger Corman movies, Japanese import horror films, and independent monster releases. But the first movie I saw there was the last reissue of “The Wizard of Oz” before MGM sold it to CBS. It scared the bejesus out of me, and what made it worse was that, on the way out, I turned around and saw the mural with those two humongous masks of comedy and drama glaring down at me above the lobby. I was so rattled that I begged my parents to take me to Topps Drive-In across New Hampshire Avenue for a double-decker burger and a milk shake “so think you have to take lessons to drink it.”

See the photos in some of the links above.

I just discovered this site and it evokes such fond memories of the mid 1950’s when I spent numerous Saturday afternoons of my childhood at the Allen theater. I recall the matinee double features, and the live vaudeville/clown acts between the films. Also, the popcorn machine that dispensed a small bag of popcorn for 10 cts. It’s a shame that modern civilization inevitably destroys the landscapes of our youth, and all we are left with is our memories.