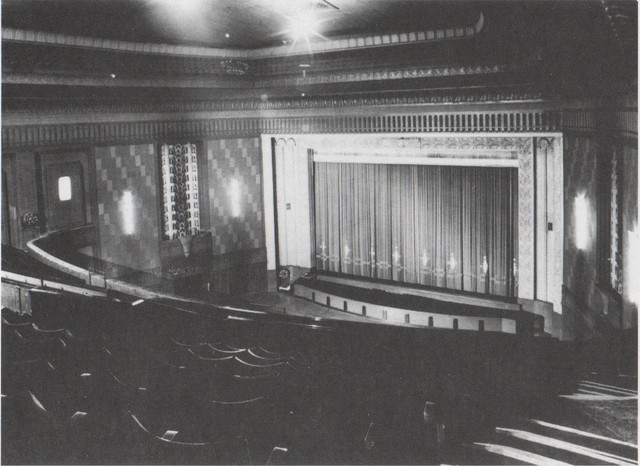 Located in Sale, Cheshire, now part of Greater Manchester. Designed by the famous British cinema architectural firm, Drury & Gomersall, the Pyramid Theatre is a classic example of an Egyptian-style cinema in Britain and had a 1,940 seating capacity.

The frontage although not particularly Egyptian in overall design does have various Egyptian style mouldings and fluted pillars. Internally, the Egyptian theme was again largely mouldings and finishes like Graumans Egyptian Theatre in Hollywood. The theme was included in the specially designed Christie Organ, which is currently installed in the Blue Coat School in Oldham.

The Pyramid Theatre changed hands a couple of times between its opening on 24th February 1934 and 21st December 1942 when it was taken over by Oscar Deutsch’s Odeon Theatres Ltd. chain. It was re-named Odeon on 18th June 1945. During the 1970’s a TV programme named “Screen Test”, hosted by Michael Rodd, was broadcast from the Odeon, Sale.

In 1981, the Rank Organisation closed 29 of its Odeon cinemas and the lease for the Odeon Sale was bought by the Tatton Cinemas (Gatley) Ltd. group and it was re-named Tatton Cinema. There were plans to convert into a triple-screen cinema, but these came to nothing. Stage shows returned to the theatre, however the running costs caused the lease to revert back to the Rank Organisation in 1984 and the building was closed.

The cinema was purchased by Trafford Borough council for £200,000, but by 1987 the costs to the council were estimated at £1.5 million. A campaign was started to save it from demolition.

In 1988, it was advertised for sale by tender and by 1990 the cinema was converted into an American themed nightclub, known as JFK’s (quite how the Egyptian theme lent itself to this is anyone’s guess!).

The nightclub closed around 2001 and the auditorium was transformed into a franchised L.A. Fitness Centre, using a former front stalls exit as its entrance. The main entrance and foyers are currently unused. In 2013 it became a Sports Direct Fitness Club.

The Pyramid Theatre was designated a Grade II Listed building in November 1987.

I would like to say how interested I was to find information about the Pyramid/Odeon Sale.My late father (Harold Maude)was the chief projectionist from about 1934 until he retired in 1979.

Two exterior views of the Pyramid, Sale when it was the Odeon here:

Another (sad) picture after closure here:

[i]“… Undoubtedly the most splendid cinema in Sale was the Pyramid on Washway Road; this was designed by Drury and Gomersall in an "Egyptian” style, hence the name. The Pyramid was built 1933-4 to seat 2,000 at a cost of Â£70,000. The building included a first-floor cafe advertised as the “rendezvous for discerning folk” and, flanking the cinema, two rows of shops were built in a style which harmonised with the nearby Post Office.

“Once built, the Pyramid then needed a licence to open; this was refused by the magistrates after oppostion from, among others, the Palace and Savoy cinemas and the Regal, Altrincham. A protest meeting was organised by a local committee which included the vicar of St. Paul’s. The meeting was a success, as the Pyramid’s 2,000 seating capacity was filled and another 2,000 gathered outside; a petition had attracted 18,000 signatures.

“The result was that a licence was then granted and the Pyramid was opened for its first public performance on Monday, February 26, 1934 with a film and stage show. It is a cinema typical of prosperous suburbia of the 1930s and was built with a spacious car park. The Pyramid was bought by Rank in 1941 and, later, became an Odeon cinema. The Odeon showed its last film in October 1981; the cinema was sold and later re-opened as the Tatton, finally closing in 1984.”[/i]

From A History of Sale, by N.V. Swain.

Since the Tatton closed, it opened as a nightclub called JFK’s in 1990, then it closed again for a few more years before reopening as an L.A. Fitness gym, which it is now.

Here are some more photos of the Pyramid Cinema/Odeon Cinema, inside and out.

A couple of extras from September 2006: from above, and around the side.

Three exterior pictures taken in March 2009 here – a peek inside the gym revealed that much of the original design has been restored and is on display.

This was a truly magnificent cinema in south Manchester it had stalls and a circle , other cinemas in Chorlton Withington and the Classic in Stockport were all run of the mill , but the Tatton as i knew it , was great when i went there in 1984 saw i number of films such as The Temple Of Doom , Romancing the Stone , shortly after that it closed , but sadly was never busy . My time in that year was too brief when went there . I took a visit last year in to the Tatton thank fully most the orginal interior is still there, it had a huge screen for the movies. Yours Bob Kincaid

By chance I visited Sale overnight, and passed by the Pyramid/Odeon, which is now a Sports Direct Fitness gym. I was surprised to find that the main street presence has absolutely no signage at all for the gym, and indeed the main doors looked like the building was shuttered and disused. I didn’t realise that the entrance is in fact at the rear of the premises! Even so, you’d think that there would be something on the front elevation wouldn’t you? The building is looking scruffy, with plants starting to grow, not good for a Listed building!