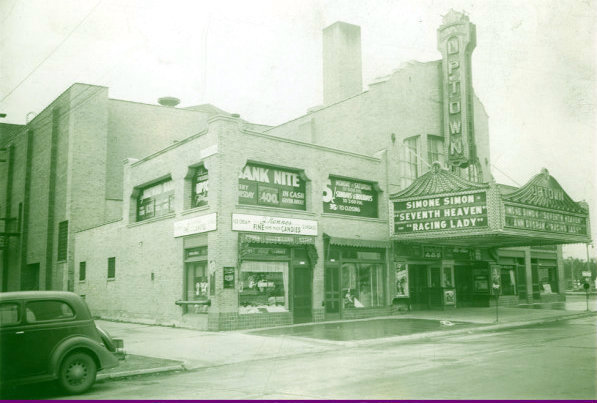 The Uptown Theatre was on Milwaukee’s near north side (hence, uptown of downtown) until the summer of 2001 when the city demolished it to use its large parcel of land and another in front of it for a new district police HQ and a communications center. While it was not the fanciest or largest of the city’s theatres, it was a nice neighborhood job by noted Chicago architects Rapp & Rapp.

When it opened on September 3, 1927 with Jack Mulhall in “The Poor Nut”, it stood on a large lot bordered by streets and alleys, so the clear view of the freestanding building allowed for a more dramatic treatment on the exterior.

Originally, the theatre was to have a dance hall and amusement center, but plans were simplified and only the six unusual niches on the parapet wall above the four stores flanking the theatre’s entry were retained as gestures to beauty. Each niche was 20 feet long, by 10 feet high, by four feet deep and the openings were centered by four-foot tall limestone urns surrounded by artificial shrubbery and backlit at night. A cascade of lights on the original marquee backed the name sign and the triple windows above it had beautiful draperies visible which hung in a display alcove above the ticket lobby.

A long, narrow lobby with a barrel vaulted ceiling led to the back of the auditorium and in the center of that lobby was a fountain of a boy holding a copper umbrella which spouted water from its apex and the base was a pedestal of glazed tiles in mixed blues. Similar tiles were used to outline the blind panels that made up the walls with poster cases upon them and there were frosted glass Art Deco chandeliers overhead.

The foyer originally had a small candy stand that allowed room for an ornate etched glass mirror hung on silken cords, but by the 1940’s the stand had grown to a 15-foot-long counter that extended past the aisle entry doors so that they had to build out new curved walls to form a way to get to the doors. By that time, the mirror was long gone.

The auditorium was graced by pergolas projecting six feet from the walls, three on each side, and contained murals on canvas of Italian landscapes lighted from the balconettes which formed the bottoms. From the tops of the columns the pergolas met the pierced arabesques of a flat cornice behind which were lights in the three house colors: red, blue and yellow. The organ screens were similar pergolas with panels of white fabric covering the swell shades, right in the middle of their murals. Up lights here cast a changing glow of colors. A stenciled ashlar pattern in mixed blues and browns bordered the single rectangular dome in the ceiling, the cove of which furnished the major illumination. In front of the organ screens hung Art Deco styled chandeliers of frosted glass sheaths with a bottom bowl of crystal strands (these were removed many years ago and used in a farmer’s barn!). The rectangular proscenium arch was cove lighted and had the same ‘in-curved’ corners sometimes called ‘plaque shaped’ that the cove of the dome had. The original Grand Drapery was a line of seven swags in dense pattern separated by six light colored galloons from which tassels were suspended.

Perhaps the most unusual feature was the act curtain used to cover the picture sheet (screen). It was a shiny satin arranged in light and dark colored ‘V’ shapes radiating from the center line of the drapery where they no doubt parted as the footlights bathed the rippling satin in colorful display. The shallow balcony held only ten rows but that made the acoustics easier to plan, all the better to enjoy the 3 manual, 10 rank Barton theatre pipe organ which had been opened by organist Les Hoadley. The console of which was in ivory with gilt rococo mountings (it was removed and sold years ago). There were only seven control groups of house lights, but then this was a modest movie palace.

The 23-line stage had several traps and the permanent counterweight system allowed a variety of stage uses, such as the Muscle Man contests held in the theatre’s last days.

When it closed in 1980, it was still in good enough condition to reopen, but a careless maintenance man reportedly turned on the water to a red hot boiler that had been dry and the resulting steam explosion destroyed the boiler and flooded the theatre up to the fourth row of seats. Perhaps this was the last straw, for United Artists abandoned the building and it rapidly decayed without the heat vitally needed to keep the plaster from softening in our freeze-thaw-freeze climate.

Small community groups did manage to make sporadic use of the drained auditorium, but their unit heaters plunked on top of the seats with vent stacks bored through the exit doors did not make the place very hospitable. Several citizens nominated the theatre for local landmark status in the eleventh hour, but the city’s Historic Preservation Commission meeting on June 15, 1998 declined to grant any designation citing the extensive damage to the fabric of the building and the lack of any real outstanding significance vis-a-vis other extant theatres in the city.

By the time of demolition, pigeons flew freely through the stagehouse’s rotted-out roof and their droppings made a carpet upon the stage. Local theatre buffs made a farewell tour as the salvage man removed the chandeliers in the lobby and any other remaining materials of value. For so substantial a building of beige brick and limestone trim, it was disheartening to see the ease with which the new hydraulic ‘jaws’ of a steam shovel-like device could just bite through the heavy steel columns and drop the building upon itself. How sad to watch the destruction that is always so much easier than construction.

The original organ resides in the Fischer Theatre in Danville, IL, awaiting restoration.

The introduction to this theatre should be corrected. The second paragraph refers to Rapp and Rapp’s exterior treatment of the Paradise in Chicago, but the Chicago Paradise was designed by John Eberson, not Rapp and Rapp.

As a young boy in Milwaukee, I frequently attended the Uuptown. On December 7, 1941, attending a Sunday matinee, it was there I received the news of the bombing of Pearl Harbor. I’ll never forget the Uptown.

I am reading Gene Wilder’s autobiographical ‘In Search of Love and Art’, and learned that he went to this theater often! Apparently he lived in the neighborhood (his name then was Jerry Silberman; his mother is buried somewhere in the city).

My mother in law went to school with Gene Wilder btw. Anyway, she remembers attending this theater all the time with her sister. It only costs a nickel. That’s where they were when World War II was declared. They stopped the show and everyone went home. She was only 9 at the time and her sister was 11. She thinks the Manager put the radio in front of the public address system because she remembers hearing President Roosevelt speaking. It was a very scary day.

“Les” Hoadley was the first to play the Golden Toned Barton Theater Pipe Organ console which was in ivory with gilt rococo mountings. It was a 3/10, manual/rank, keyboards/sets of pipes, shipped from the Barton Organ Company factory in Oshkosh, Wisconsin in 1926. I saw a photo of the console at the Fischer Theatre in Danville, Illinois, but I don’t think it has been installed. Anyone have any further info?

The Uptown was the first theater I attended by myself as a child – I lived in the neighborhood and walked to it (Hi Mount Blvd). I am saddened but not surprised the theater is gone but I want to thank the folks who posted such wonderful recollections – especially the one about Gene Wilder (aka Jerry Silberman). Strong memories of that place….

This was the upscale theater of my youth. I lived on 24th and Lloyd and went to the Rainbow, Climax, Savoy/Oasis as a rule which showed either cheap, children, second run movies (saw a lot of 50s monster/sci fi movies on Sundays at the Rainbow) But if I wanted to see Ben Hur or The Ten Commandments I had to walk thirteen blocks to the Uptown and thirteen back (these were the days when parents didn’t chauffeur their kids everywhere) but it was usually worth it.