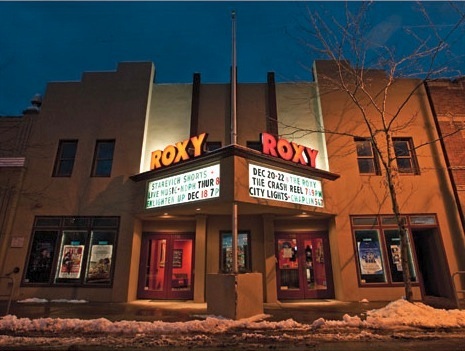 The Roxy Theater was opened September 26, 1937 with Deanna Durbin in “3 Smart Girls”. From its opening it operated as a second-run movie theater and all seats were on a single sloping floor. After years as a dollar theater, the Roxy Theater was almost destroyed in a 1994 fire. It reopened with 3-screens November 27, 1998 and closed January 7, 2000.

A wildlife organization purchased the theater in 2002. The organization uses the building for events, along with movies, including the annual International Wildlife Film Festival every spring.

Here is a photo from the Mansfield Collection at the University of Montana. The date is given as 1949, which may or may not be correct. The first version of “The Ten Commandments” was released in 1923, while the second was released in 1956. The car in the photo looks more like mid fifties than late forties, so my hunch is that the photo is circa 1956:
http://tinyurl.com/2wgxpg

The Roxy Theatre opened in 1938 with seating at that time listed at 600.

Facade renovations to match 1930’s to come.
Article below.