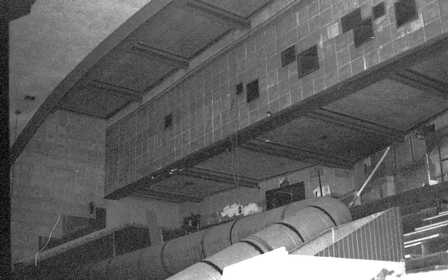 The Palace Theatre opened in 1898 and was designed by architect John Rust. It had a seating capacity of 1,800 is stalls, dress circle and balcony levels. It was built on the site of the People’s Palace which was destroyed by fire in 1896. The interior of the Palace Theatre was in an Oriental style. Films began to be screened as part of the variety programme from 1904.

On 8th April 1929 it was taken over by the Poole’s circuit of cinemas and seating was reduced to 1,714. It closed on 7th March 1931 for the re-construction of the interior. The architect C.T. Marshall of the architectural firm Marshall & Tweedy ripped out the circle and balcony and all the Oriental decoration and in its place created a single circle Art Deco style cinema with 2,000 seats.

In June 1936 it was taken over by the County Cinemas circuit, who later became part of the Odeon circuit, although the Palace Theatre name remained. It closed as a cinema on 14th November 1959.

Alterations were made by the Rank Organisation to plans by architect Lennox D. Patterson which levelled the stalls floor and re-opened the stage to create the New Palace Ballroom. In 1976 it became a nightclub named Fusion, then Ritzy’s Discotheque, then Bonkers and later The Palace Nightclub. In 2019 it operates as ATIK . On 8th April 2002, Historic Scotland designated the Palace Theatre a Grade C(s) Listed building. It has been placed on the Buildings At Risk Register.

Hi,
I noticed The Palace has another new name,
ATIK.