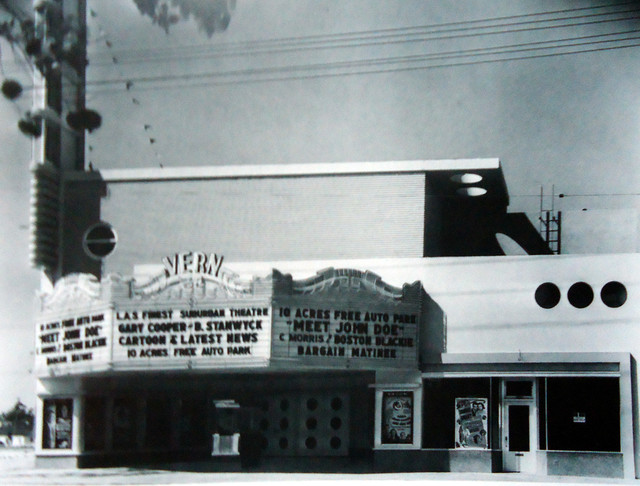 The Vern Theatre was opened May 28, 1941 with Alice Faye in “That Night in Rio” & Joan Blondell in “Topper Returns”. By 1957 it was operated by Aladdin Enterprises. It was closed August 30, 1964 with Luke Halpin in “Flipper’s New Adventure” and Tony Curtis in “Wild and Wonderful”.

It became a church in 1965, and in 1978 it became a restaurant/nightclub named Don Quixote’s East and into the 2000’s as Don Quixote Reception Hall & Event Center.

In 1963, the Vern was operated by Aladdin Theaters, formerly Eastland Theaters. At that time, Aladdin also operated the Belmont, Brooklyn, Jewel, Largo, Meralta and Terrace in Los Angeles as well as the Linda in San Diego.

I remember Aladdin Theaters. They ran a number of drive-ins, too. Their logo, as I recall, was a lamp with a chubby genie rising from it. In fact I think the Floral may have been one of their drive-ins for a while. Ron Pierce says the Anaheim Drive-in was built by Aladdin. I also have a vague recollection of the Aladdin logo on the Vineland when it was first opened (I was about ten years old, I think, so it’s hazy.)

This item in Boxoffice magazine dated 4/29/50 may refer to the Vern:

Another shuttering was that of the Vernon-Vogue Theater in East Los Angeles by Gladys McLean. A 700-seater, it’s being closed because of lack of business.

i always thought that was an odd looking restaurant,but i think that when they built it they had the sears shoppers as customers,but i see why it got closed.

The Vern Theatre opened on Wednesday, May 28, 1941. The opening night features were “That Night in Rio” and “Topper Returns”.

This theatre recently showed up on FB’s Vintage Los Angeles with a vintage exterior photo and lobby photo!

The Vern Theatre launched May 28, 1941 with “That Night in Rio” and “Topper Returns”. It was operated by the Eastland Theatres Circuit with architectural plans by veteran theatre architect Simon Charles Lee with 832 seats at opening. The Vern ended its theatrical run August 30, 1964 with “Flipper’s New Adventures” and “Wild and Wonderful.”

The space was converted to the Last Hour Deliverance Church in 1965. In 1978, Salvador Quezada converted the space to a nightclub and restaurant called Don Quixote’s East. The space continued into the 21st Century as the Don Quixote Reception Hall and Event Center.

Mr. NooNE. Will you state your full name, address, and business affiliation for the record?

Mr. BERMAN. My name is Isadore Berman. I live in Los Angeles. I have been an exhibitor since 1930. I am in partnership with my brother, Jack Y. Berman. Prior to the year 1948 we operated 14 theaters. Since that time we have closed 6 of these 14 theaters. We now operate 8 conventional theaters and 3 drive-ins.

Mr. NOONE. They are all in the Los Angeles exchange district?

Mr. NOONE. Do you have some testimony with relation to zoning which you wish to offer to the committee?

Mr. BERMAN. Yes, sir. The system of zoning as set down by the distributors has been gerrymandered around so that the only purpose, as I see it, is to help them get increased film rentals. I have a case here of the picture Quo Vadis. I received a letter from Metro-Goldwyn-Mayer, dated August 19, 1952, in which they asked me, or they offered me the opportunity of bidding competitively for the picture Quo Vadis on our Vern Theater.

Senator SMATHERS. May I interrupt right there to try to get somethinf on the record? ‘Vhen you say “they” offered you, who offered you.

Senator SMATHERS. Where is he located?

Mr. BERMAN. He is located in Los Angeles.

Senator SMATHERS. Mr. Aspell contacted you about it?

Mr. BERMAN. Yes. The availability for this run would be September 10, 1952. The bid letter was due in the office of Metro-Goldwyn-Mayer on August 25.

Well, I submitted a bid for this run before the proper time, and I didn’t hear again until September 3, which is exactly 1 week before the picture was to play, if I did win the picture.

Mr. NooNE. What run were you bidding on, first run?

Mr. BERMAN. No, a subsequent run. The Vern Theater is located in the Boyle Heights section, which is a neighborhood out on the east part of town, sort of isolated.